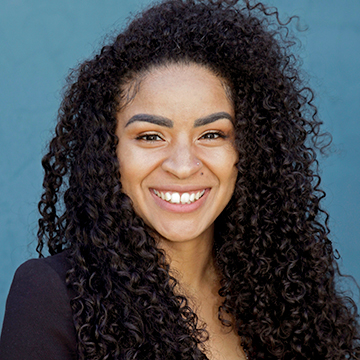 Vanessa Dotson — the first in her family to pursue a baccalaureate degree — says coming to SMC “was one of the best decisions I’ve made. It’s so open and really diverse.”

Raised in Fresno, Vanessa was accepted at CSU Northridge. When her mother could no longer support her financially, she went to live in Los Angeles with her then-estranged father. One day, she came home to find her bags packed at the door.

Putting her college dreams on hold, Vanessa spent the next four years homeless. Financial distress was just one hurdle. Half African American, half Latina, she also faced racial and sexual discrimination, but persevered. “My hunger for knowledge keeps me going.”

Vanessa was driving for Uber when a passenger, an SMC student, “told me why she liked SMC, so I decided to check it out.”

At SMC, Vanessa thrived. She got involved with the Black Collegians program. The first woman in the SMC Investment club, she marketed and expanded the club’s membership. And she became a member of the Phi Theta Kappa honor society.

Bringing awareness of marginalized groups of people is one of Vanessa’s many goals. She is also a mentor to her many siblings and stepsiblings. “Life is unfolding, and we all have different obstacles to overcome,” she said, “but we make little successes every day.”

Vanessa graduated from SMC with an Associate degree in Liberal Arts. She transferred to UC Riverside as a Business major, and plans to continue studying through graduate school.