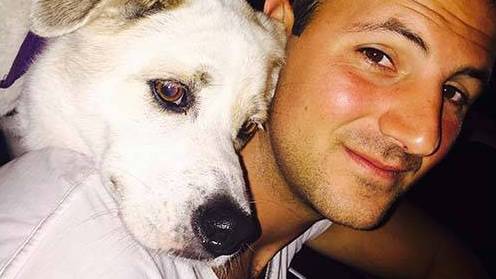 You could say Greg Verini was born with a silver swizzle in his mouth.

The child of Wall Street investment bankers, a three-sport varsity team captain at his elite New England prep school, on the outside Greg exuded the confidence of a privileged One-Percenter. On the inside, he was drowning in alcoholism and despair.

This is the story of how a lost, near-broken young man rebuilt himself at Santa Monica College.

Greg’s home life was troubled even before 9/11. His parents had divorced when he was a toddler. His banker mother traveled incessantly on business. His father, also a banker, had a busy social life fundraising for New York City politicians.

A revolving door of nannies didn’t fill the void. “We kind of raised ourselves,” said Greg, the “we” including his older sister Alexandra, who went away to boarding school when he started 4th grade. School friends envied Greg’s independence, but he craved the parental meddling other kids complained about.

Then came the morning of September 11, 2001. When the Latin teacher at his Upper East Side independent boys’ school asked if anyone had family in the World Trade Center, Greg’s was the only hand that went up. His mother and father both worked in the adjacent World Financial Center.

Four anxious hours passed before Greg’s dad appeared, ash-covered, to collect his 13-year-old son from the school nurse’s office. Night had fallen when they heard from Greg’s mom. She’d come out physically unharmed but emotionally seared by what she’d seen: an airplane wing had plunged into her office suite, killing several co-workers. As she fled Ground Zero in stockings, flaming bodies had landed at her feet.

“She still wakes up screaming,” Greg said. “The nightmares start at the end of August every year.”

More family tragedy followed. The day after the Twin Towers fell, Greg’s father suffered a stroke. A few months later, a second stroke compounded the brain damage, and a botched surgical repair procedure left him in a vegetative state. Greg accompanied his 18-year-old sister to the hospital the day she signed the forms removing their father from life-support; he remembers staring at his dad’s inert body, still bloated with surgical gases.

All Was Not Well

Greg had already started drinking by then, at first beer, then hard liquor. “I had a running narrative,” he said, “especially after my dad’s death, that I needed to change myself to belong.”

As Greg’s mother buried herself even deeper in work, and his sister escaped to college in London, Greg spiraled into full-blown alcoholism. It ran in the family: all four grandparents had died from alcohol-related illnesses, and an uncle had killed himself with liquor.

When he left for high school at Boston’s elite Milton Academy, Greg started using cocaine to sober up, so he could drink even more.

Yet on the surface, he seemed to be thriving.

“I was a sports star. I had great friends. The sense of not belonging was always a narrative I told myself.”

He was recruited from high school in three sports, and accepted a football scholarship to Lake Forest College in Illinois. But an injury soon ended Greg’s college athletics career.

He stopped going to classes, and briefly used opiates. “But drinking was always the central figure in my life,” he said.

After freshman year, he drifted back to New York City.

Still, on the surface, he seemed to thrive.

He found a music industry internship that evolved into a paying job as a talent scout.

He became a successful investor, growing the six-figure death benefit he’d received from his father’s insurance.

He was in a long-term romantic relationship.

But happiness eluded him, as the drinking and drugs continued.

“I was putting up the type of façade I’d been taught to value, while I was crumbling inside,” he said. “I had this internal narrative that death was right around the corner. I hadn’t come to terms with my own father’s death.”

The bottom finally fell out in 2015, after his girlfriend discovered his web of lies. Greg had quit his scouting job years before, but he still dressed for work each morning—then spent the day at a bar. “I was lying to her about my drinking, my life, the direction I was going. It was dark.”

After she walked out, Greg descended into suicidal depression.

She talked him into trying rehab first.

A month later, clear-headed for the first time in years, Greg transitioned to a sober living program in Brentwood, California.

Around the same time, he began reading voraciously—Aristotle, Mill, the Koran, and the Bible—searching for the elusive key to happiness.

“I developed the belief that I could reach back to some past communal knowledge to guide me,” he said. “The things I had been taught clearly weren’t working. I’d had the money and the lifestyle, and it had made me miserable.”

That’s when he enrolled at SMC, where he quickly bonded with several professors.

“They were supportive and helpful, and recommended more books,” he said. “SMC is a teaching college. The faculty are all there because they want to connect with you.”

He forged a connection with Heather Bennett.

“What stands out is Greg’s resilience,” said the assistant professor of history, who had him in three different classes. She was struck by “his ability to shine no matter what’s going on around him.”

Susan Sterr was struck by his big-heartedness.

“He's one of the kindest and most humble students I've known,” says the SMC English professor, who had Greg in her mythology class.

Outside classes, Greg threw himself into social causes. He volunteered for the Bernie Sanders campaign, logging 20 to 30 hours a week knocking on doors at the height of the 2016 primary season.

He got involved with the nonprofit 826 LA, tutoring underprivileged kids in reading and advising college-bound students on their UC application essays.

He became a sponsor in the local chapter of Alcoholics Anonymous, guiding others through the 12-step program that had turned his own life around.

In his spare time, he continued his intellectual quest for the key to happiness, reading authors like Sam Harris and Malcolm Gladwell.

One key was physical activity. “A big part of me getting sober was getting back to sports,” he said. Contact sports were no longer an option. He’d suffered 16 concussions—mostly from football, lacrosse, and wrestling, but a few from what he calls “drinking escapades.” He took up surfing, skiing, and pick-up sports.

All the while, he excelled in his classes, earning a 4.0 GPA as a pre-history major while indulging his intellectual curiosity with electives in philosophy and psychology.

He came to believe that academic learning, when integrated into daily life, leads to happiness. Everything he read, no matter how esoteric, had applied value. From a course on PTSD, he designed his own meditation-based treatment for the anxiety he still feels around 9/11. An ethics course with SMC Philosophy Professor Paul Klumpe “helped me figure out my own path,” Greg said. “I try to make sure that every day I’m honoring my own values.”

It was his mentor Heather Bennett who introduced Greg to SMC’s Scholars program, where he connected with his “amazing advisor” counselor Denise Martinez (The Scholars program provides smaller classes and intense academic preparation for eligible students; they receive priority consideration for admissions to certain four-year campuses). Both wrote glowing letters of recommendation for his transfer application, which helped get him admitted to Stanford, Claremont McKenna, and UCLA.

Last fall, Greg transferred to UCLA as a merit scholarship student. He chose the Westwood campus, in part, to be near his sister Alexandra, who is finishing her PhD there in medieval English literature. The siblings have grown close again. In 2016, Greg accompanied her on a research trip to France, helping out with a digital mapping project of female authors before 1500.

Holding a steady 4.0 GPA at UCLA, Greg plans on graduating in 2019 and then, graduate school in public policy. An internship at the Center for the Study of Political Graphics sparked that new direction. Greg spent the summer helping the Culver City-based poster museum prepare its current exhibit on the Black Lives Matter movement. He also spent time translating Chinese posters in the collection (Greg is fluent in Mandarin).

All these interests and experiences started coming together this spring, as he begins his year-long honors thesis project. Tentatively titled “Whoever Controls the Narrative Controls History,” the 60-page paper, which he hopes to publish in a scholarly journal, will explore how American patriotism, from Vietnam to the Iraq War, has been “redefined by a fear- and shame-based corporate culture to block social change.”

Edgy, original ideas coming from a recovered alcoholic One-Percenter. But then, people who know Greg wouldn't expect anything less.

“I’m not surprised that he’s doing so well at UCLA,” said Heather Bennett. “And I’m not going to be surprised when he earns his master’s degree. I’ve come to expect it from him.”