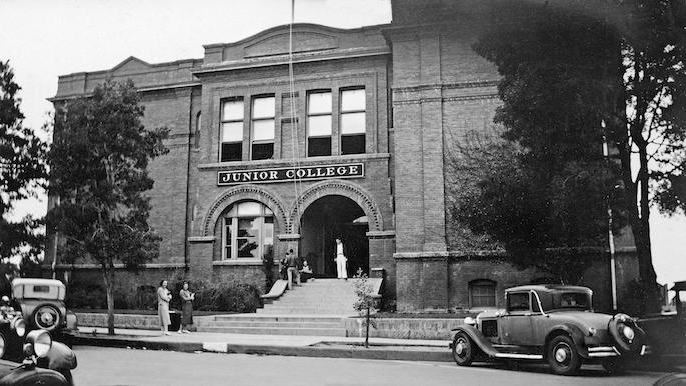 A Celebration of Distinction

Michael Soto, Psychology
I tell everyone that if there’s anything they can imagine accomplishing in their lives, SMC is the absolute best place to get started toward it.

The end of the Roaring Twenties ushered in the Great Depression, the first Academy Awards were held, and a certain Santa Monica Junior College opened its doors to 153 students. Evolving missions led to new names — “Santa Monica City College” — and eventually “Santa Monica College,” to reflect the College’s service to the Westside, and to the Greater Los Angeles.

A pioneer of the uniquely American community college movement, SMC fulfills the educational needs of the broadest possible cross-section of its community. The first-generation college student who struggled with science and thought her dream of going to medical school would remain just a dream, the new immigrant wanting to learn English, or the single parent seeking to acquire skills for a better job, the College has fulfilled thousands of such aspirations, and more.

Today, SMC leads the nation in transferring students to the prestigious University of California system — a record unbroken for over 25 years — and serves more than 30,000 students. Set on a 38-acre main campus with five satellite locations across the sunny seaside city of Santa Monica, SMC offers students the collegial experience and educational quality typically found at a scholastically rigorous four-year college or university, at a fraction of the cost.

The 21st century rolled in with major growth for SMC: a new campus opened in a prime downtown location for its Emeritus College for older adults; two bonds — Measure U and Measure S, totaling $295 million — passed by local voters; a modern library unveiled; and “equalization” funding gained, ending two decades of state funding inequality. Measure V, a $345 million bond was approved in 2016 to complete the SMC Master Plan.

In 2015, Santa Monica College bid farewell to Dr. Chui L. Tsang, who served as Superintendent/ President for nearly a decade and championed the college’s forward-looking Global Citizenship Initiative, among other accomplishments. Dr. Kathryn E. Jeffery was selected to be SMC’s next Superintendent/ President after a nationwide search. With over three decades of diverse higher education experience—encompassing roles as professor, counselor, and administrator—from arts and educational leadership education, to student services and Career Technical Education, Dr. Jeffery is a passionate advocate for higher education, one who takes pride in a student-centered approach to leadership and decision-making.

Spurred by more than 100 letters of support from top names in government, politics, and the LA technology and entertainment industries, Santa Monica College proposed offering a Bachelor’s degree in the emerging, but high-demand field of Interaction Design. In May 2015, SMC was selected to be one of the first 15 California community colleges to be a part of this historic pilot program. SMC’s Bachelor of Science Degree in Interaction Design prepares students for careers as interaction designers in Silicon Beach, the moniker given to the Westside’s rising tech scene, and offer a gateway to professional advancement for many.

The College’s reputation as the Westside’s leading job trainer was also heightened by its role in creating an LA-based consortium called the “Los Angeles High Impact Information Technology, Entertainment & Entrepreneurship, and Communications Hubs.” Better known by its acronym LA HI-TECH, the group was recognized in 2015 by President Obama’s TechHire Initiative for its work in preparing students for jobs in the information, communication and technology sector.

To encourage more students onto pathways toward careers and further higher education, SMC expanded dual enrollment opportunities for high school students, creating special programs like First Year Experience and Summer JAMS to give first-time college students a head start. Also, the SMC Board of Trustees waived enrollment fees for high school students, and those who qualify can now take classes at SMC for free.

Radka Varimezova, Science
SMC is a real magnet for students from all over the world. They all have a story, and interacting with them makes life very colorful.

The recent emphasis on closing the achievement gap — ensuring that all students are able to succeed, regardless of race, ethnicity, socio-economic status, or gender — has brought renewed funding from the state. The vision of the College’s past President Richard Moore, who realized the value of strong student support, laid the foundation to make SMC’s counseling and student support system the largest in California.

SMC’s cornucopia of special programs has grown with the inclusion of programs like the Veterans’ Resource Center, the First Year Experience for first-time college students, the Guardian Scholars Program for foster youth and — thanks to a $6 million federal grant, the second such five-year grant for the building up of STEM (Science, Technology, Engineering and Math) programming that offers research opportunities in collaboration with UCLA to hundreds of underrepresented students, and prepares them for transfer into a STEM major or for direct entry into a STEM career.

SMC is also working to change the paradigm that the transformative power of education stays in the classroom. Through an initiative called GRIT (Growth, Resilience, Integrity and Tenacity), the College is investing in research-based resources to help students who want to develop “non-cognitive skills” — including the ability to persevere despite challenges and failures — along with the skills they need to succeed in the classroom.

The College developed an award-winning educational planning program called “MyEdPlan”, which allows students to plan their academic pathway so that they can earn a degree or transfer more quickly.

With new funding to level the playing field, the future outlook for SMC’s efforts to champion all of its students is truly bright.

Keith Graziadei, ESL professor
One of the reasons I love teaching at SMC is the depth of talent here.

A passion for being ahead of the game is an SMC trademark. New degrees are constantly being developed, including career-focused ones created in consultation with industry advisors, and taught by instructors with current professional experience. SMC’s new programs include Associate degrees in Global Studies, Ethnic Studies, Technical Theatre, Entertainment Promotion and Marketing Production, and California’s only Public Policy program, to name just a few.

Today, SMC students can choose from more than 90 fields of study in the liberal arts and the sciences, as well as career technical education degrees — in areas like Accounting, Journalism, Computer Science, Early Childhood Education, Cosmetology, and Nursing — that prepare them for a competitive entry into the workforce.

A strong emphasis on innovation and student success over the years has led to distinction for SMC students in many fields. SMC students, for example, boast greater success on all sections of the Certified Public Accountant (CPA) exams than any other community college in the nation — and outperform all the California State University campuses as well.

SMC’s film production program rivals the best film schools in the nation. The very first student film to come out of the program was a finalist for a BAFTA (British Academy of Film & Television Arts) Award, and won Best Short Drama at the San Diego Film Festival. Student films have been invited to many domestic and international festivals, including the American Pavilion at the Cannes Film Festival and FilmSchoolFest Munich, and have won many prestigious awards.

SMC students and faculty also deliver culture and arts to the public while perfecting their talents — providing a constant stream of affordably priced, high-quality theater, music, and dance performances, as well as exhibitions of art and photography.

The College’s reputation for solidly preparing its students to continue their higher education has attracted renowned universities in the United States and abroad to seek partnerships with the College in expanding student access to higher degrees. Arizona State University, for example, selected SMC as the first community college in California to be offered guaranteed admission for its students. Most recently, SMC was selected to partner with UCLA in creating a four-year Integrated Teacher Preparation program.

Santa Monica College’s academic excellence has always been driven by world-class faculty who are here because they believe in the power of the student-teacher connection. In the last decade, SMC has hired more than 100 new full-time professors with distinguished credentials, representing the best in their fields. A Center for Teaching Excellence — one of just a handful of such centers at community colleges — serves as a “pedagogical playground” where instructors can learn how to address the particular challenges of teaching in a multicultural and technology-driven world.

Read more about Santa Monica College 's legacy as a pioneer community college, and a recap of excellence achieved in the last decade in the SMC Historical Brochure.