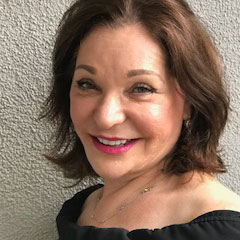 Professor Judith Douglas currently serves as Chair of the SMC Dance Department and she has been teaching dance at SMC since 1974. She is the founder and former Artistic Director of Global Motion, World Dance Company (formally Folklorico de SMC). Since coming to Santa Monica College, professor Douglas has taught Dance in American Cultures, Dance History, all levels of Ballet, Modern dance, Jazz dance, Tap dance, African dance and Mexican dance. From childhood through adulthood she has performed dance on stage and television. She holds a B.A. in Art, M.A. in Dance, and a lifetime Secondary Teaching Credential.

Judith Douglas began dance training in Cecchetti Ballet as a young child. She continued with the Imperial Society of Dance to pass all of the ISTD examinations in Cecchetti Classical Ballet Technique. She then went on to study and perform regional Mexican Dance, Traditional West African, Katharine Dunham Technique and Tap Dance. She has also taught at Los Angeles Pierce College, West Los Angeles College and Mission College.

Aside from SMC, Judith has served four years as a board member of Asociación Nacional de Grupos Folklóricos and has taken students to study and perform Mexican dance throughout the U.S. and Mexico. She has adjudicated the Amalia Hernandez National Ballet Folklorico Competition for two years and has created performances for the Los Angeles Mayor's Office. Judith Douglas has been an active participant in the SMC Academic Senate. She has served on the Sabbaticals and Fellowship Committee for four years, as the Senate Treasurer for two years, Chair of the Social Committee for two years and has served as chair of the Professional Development Committee for the past four years. She has served on the SMC Global Council, the Basic Skills Initiative Committee, and the Facilities Planning Committee. She was the recipient of the SMC Foundation Chair of Excellence Grant and was sent by the college to attend the Salzburg Global Seminar. She has recently been awarded a Sabbatical to write a course reader in Dance in American culture.