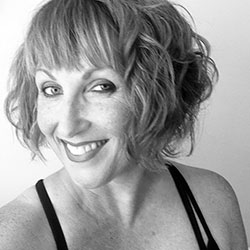 Jennifer Jesswein holds a BA in Fine Art from California State University, East Bay. Beginning with Baton at age four, her background also includes Ballet, Tap, Turkish-Egyptian Dance, Theatre Arts and Fine Art. Jesswein began studying Turkish-Egyptian dance in 1996 and has been teaching classes and workshops since 2001. She began teaching Mother-Daughter Bellydance for Santa Monica College's Continuing Community Education in 2005. Jesswein has been a faculty member with the SMC Dance Department since 2008 after guest choreographing in 2007 for Folklorico de SMC. She was a founding troupe member of both Al Rakasaat Turkish-Egyptian Dance Company, under the direction of Karen Custer-Thurston, and Tahiya and the Staggering Goddesses of the Omphalos with the YWCA in Santa Monica.

As a student of world renowned, Ansuya, and Los Angeles based, Tahiya, she has been professionally performing Middle Eastern Dance since 1997. Venues include Cairo Caravan on the Long Beach Queen Mary, Santa Monica's Chamber of Commerce Buy Local Expo, and The Children's Burn Foundation of Los Angeles at LA Ballet. Jesswein is Artistic Director of the Bellydance troupe, Raqs Nouveau, and has choreographed for SMC's Global Motion for the past seven years. She was the five-time Director and Producer of the collective Bellydance showcase, Raq the Casbah, in Flagstaff, Arizona. She was a member of the regional non-profit organization, Theatrikos Theatre Company for 15 years. Backstage credits include scenographer and assistant director with lead acting credits as "Sister Woman" in Cat on a Hot Tin Roof, "Rowena" in Biloxi Blues, and "Doris Walker" in Miracle on 34th Street. Jesswein is also a volunteer seamstress for Westside School of Ballet, productions include The Nutcracker, Sleeping Beauty and Don Quixote.