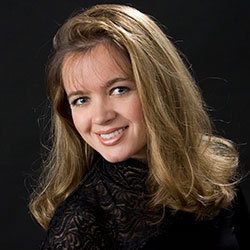 Yulia Kozlova is an active solo and collaborative recitalist. She has concertized in Russia, the United States, and Europe. Yulia has given lecture-recitals for the College Music Society on national and regional levels. She is very active as an adjudicator and consultant to area music teachers. Yulia Kozlova received her undergraduate degree from Novgorod State College of Music, Master’s Degree in Piano Pedagogy and Doctor of Musical Arts degree in Piano Performance from The Ohio State University. Yulia has taught in the music departments at California State University, Bakersfield, Marshall University and the Ohio State University. In August of 2011, Dr. Kozlova was awarded the Ilona Katz Chair of Excellence in Music by the Santa Monica College Foundation to pursue her interest in the relationship between music and visual art. In the spring of 2017, Dr. Kozlova spent a one-semester sabbatical in Prague where she researched piano compositions by composers who were incarcerated in the Terezín Prison outside of Prague. She then gave a lecture/recital at the SMC Performing Arts Campus featuring some of the extraordinary piano music by composers who were refugees at the Terezín Prison.