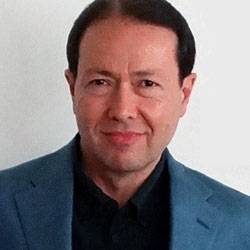 Mark attended the State College of Arts in Krasnoyarsk, Russia and received a Bachelor of Arts degree in Piano. In 1984, he attended the State Conservatory in Tashkent, Russia and received a Masters Degree in Piano and Music. As a student of the Conservatory, he began working as a concert pianist with the State Philharmonic Orchestra and toured internationally to Germany and Poland as a soloist with the Philharmonic Orchestra. Upon graduation, Mark began working with the State Theater of Opera and Ballet and the State School of Ballet as a pianist and piano instructor. During that period he was sent to the Theater of Opera and Ballet “Bolshoi” in Moscow for additional training.

He moved to Los Angeles in 1995 and attended the “Evans School of Languages” studying English and working as a pianist for the Lula Washington Dance Theater. He has been teaching piano at the “Evergreen Music Conservatory in North Hollywood, CA since 1996. Since that time he has been an accompanist at Santa-Monica College Dance Department, California Arts Institute, UCLA’s Department of Arts and Culture, Pomona College’s Dance Department and California State University of Fullerton’s Department of Theater and Dance.