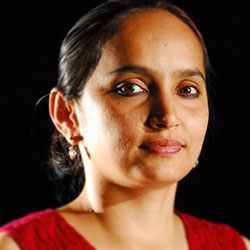 Her current work has synthesized these distinct art forms into a unified whole. She is a Gold Medalist in Dance from Mysore University and she has a PhD in Dance, Cultural and Women’s Studies from the Boston University. She was the artist in residency at the prestigious Bates Dance Festival, University California at Santa Barbara and at Brandeis University. Sindhoor is the founder and Artistic Director of Navarasa Dance Theater . Originally from Mysore India, she currently lives and works in USA and India.