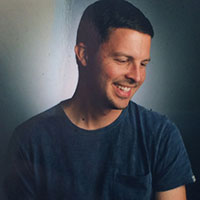 Advertising, Editorial, and Fine Art Photographer.
Senior Photoshop Artist.
Prior to becoming a full-time instructor at Santa Monica College, Josh spent 11 years as an in house photographer and senior Photoshop artist for one of the largest advertising agency in the world, TBWA\Chiat\Day. He shoots editorial, commercial and fine art imagery. He has photographed products, people and animals for top brands such as Pepsi, Gatorade, Nissan, Priceline.com, Manduka, and Pedigree. Between his advertising and his editorial/concert photography, his images have been seen on billboards and magazines throughout the country and online publications. His advertising photography work earned TBWA\Chiat\Day two Kelly Awards, a Lucie Award nomination and consistent recognition in Communication Arts. His concert photography was recognized by the industry magazine Photo District News, winning a People’s Choice Award for the Ultimate Music Moment Photo Contest. He has also been a featured artist in the Modern Collodion web feed for his wet plate photography.
Josh has been using Photoshop since 1992 and has been part of the Adobe Photoshop beta testing team since 2002. As a Senior level Digital Photoshop Artist, he has performed high end, flawless imagery for the top brands and photographers. Josh Withers earned a BFA from the University of Delaware and continued his education working alongside a diverse batch of photographers and preeminent digital artists at the Santa Fe Photographic Workshops. It was at the Santa Fe Workshops in Santa Fe, New Mexico that Josh also began his part-time career as an instructor. In addition to teaching yearly workshops at the Santa Fe Photo Workshops, Josh has also taught at the Pasadena Art Center College of Design and Miami Ad School. He became a full-time instructor within the Photography Department at Santa Monica College in 2013.