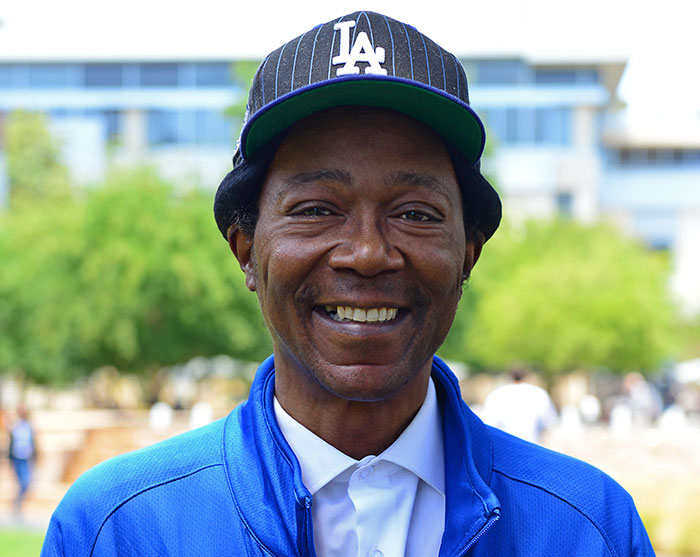 Journeying Into the Sunlight

Rayford Brown could not believe he was selected for a graduation profile. Then his brother said, "Ray, think of what you've been through. Even when you were homeless, you never asked anybody for anything. That was a long time ago," remembers Rayford. "Sometimes life is hard. There were lots of times I would fall asleep in a night class. I knew that when I finished the class, I was going to have to find somewhere to sleep."

Life dealt Rayford more than his fair share of adversity early on. Taken away from his parents as a child, he grew up with a desire to be accepted, and also with a sense that "I'm no better than anyone else." A veteran of the U.S. Marine Corps—he had served tours in Alaska, Japan, the Philippines, and South Korea in the 1980s—Rayford was "part of the middle class that fell off during the recession." He held a number of jobs, including regional manager of a logistics company, but soon found himself not only out of work, but also, for the first time since 1979, unable to find work.

Rayford had always talked about "doing something new," and a friend encouraged him to train in the renewable/solar energy field. It had been 25 years since he had last been in school, but he made some inquiries, and found a "career institute" where he took classes on solar energy. Rayford finished in the top five of his class, but it meant little because the institute was unaccredited.

Rayford went to LA Trade Tech to pick up a catalog, but he couldn't get one on campus, and he didn't own a computer, so he couldn't access class offerings online. In late 2011, he came to Santa Monica College, and had no problem getting an SMC catalog! "So I said, 'Wow, I'm going to Santa Monica College,'" he remembers. But there was just one problem: Rayford had attended SMC in 1986 and earned poor grades. His GPA was a shocking 0.49, and he was put on academic probation. "At that point I was a little disheartened, because I was, like, 'Wow, what I can do? I'm homeless. I'm just trying to go back to school'" says Rayford. "But I loved to read. So, for the first year and a half, I just took one or two courses while I tried to straighten up my life." Then, in 2013, Rayford decided that he would go all the way, that he would stick it out, and stay. He took on a full load of classes. What happened next? He went from being on academic probation to being on the Dean's list—an honor for students with a 3.0 GPA in 12 or more units. And he found affordable housing with the help of the Veterans Administration. "I went from not really caring about my grades to a point where, if I got a C, it really bothered me," says Raymond. "And I owe it to Santa Monica College pushing me to be the best that I can be. This place is the best thing to ever happen to me."

Thanks to professors like Stuart Cooley in renewable energy, Rayford signed up for every free certification course available, especially from Southern California Edison. He proudly displayed an entire stack of certificates of completion. Rayford is graduating with an Associate degree in Solar Photovoltaic Installation and an Associate degree in Recycling and Resource Management. His plans for the near future include establishing a company that will provide energy efficiency consulting services, as well as jobs for his fellow SMC students, alongside whom he has acquired a world of knowledge about the field. "So at the end of the day, going from being homeless to getting all these degrees and certifications, despite my situation," says Rayford. "I know I'm here for a bigger purpose." What he wants most is simple: "I want to use my experience of adversity to show others that, even though it's a time of adversity and a time of darkness, as long as you don't give up on yourself, and wake up every day, you have a chance."