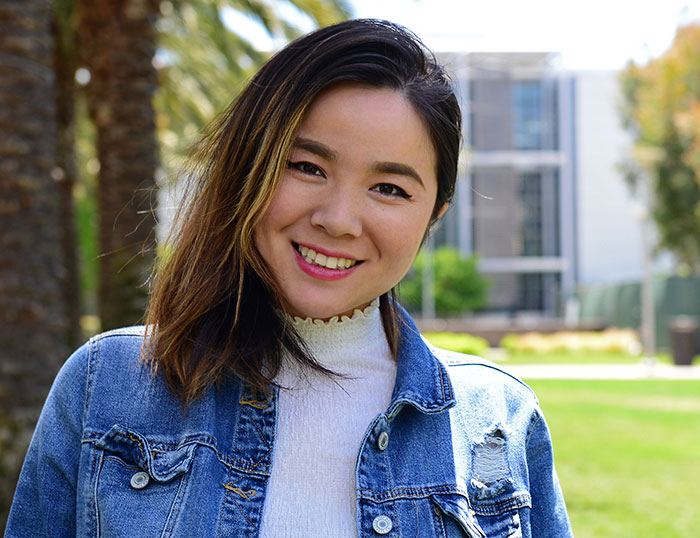 The Future is All There is

Micca Cao came to the United States because she wanted to break free. While most people don't know what their future holds, a woman in China has her future predetermined, says Micca, and that this was her mother's reality she was married at a young age, expected to serve and protect her family even at the cost of her dreams and own well-being.

My world collapsed after the loss of my beloved mother, said Micca. She was attending high school at the time, but she lost direction. She skipped classes and lost all interest in her own future. Her father got her a job as an accountant with a friend who owned an import-export company.

You know when you do something you don't feel like doing? asks Micca. That was me a robot. I did my job, but with a lot of mistakes, and was not able to listen. In the end, I just couldn't take it anymore. After three years, she quit.

Her childhood dream was to study abroad and to travel over the world. Why not give it a try? Micca thought. So she signed up for weekend International English Language Testing System (IELTS) classes and began to research schools overseas, eventually deciding to come to the U.S. She managed the entire process on her own, and, after one year, received her acceptance letter from Santa Monica College.
It was a mistake, says Micca, because I wanted to apply to Pasadena City College but I missed the deadline. It was the most beautiful mistake I ever made in my life—and that's how I ended up here.

Her father had three children and Micca's decision added a significant financial burden, and she faced resistance from her whole family. But Micca was unstoppable and used her savings to support herself for the first year at SMC.

Like many international students, Micca was faced with challenges, including finding housing, developing her proficiency in English, and making friends. But in just one year, she had joined the Phi Theta Kappa Honor Society (PTK) at SMC, was elected as a PTK officer and made new friends. Then, a fellow student encouraged her to run for Associated Students Director of Student Advocacy. With just one friend helping her, Micca launched her independent campaign—and won by 798 votes.Before she got involved in the community, says Micca, she felt new, scared, and like an outsider. All of that changed. I felt like I was a baby—like I had been born again. Every day after that, I woke up and felt ready and happy for the new day.

Her adviser—Dr. Nancy Grass, the Interim SMC Associate Dean for Student Life—also helped advance Micca's metamorphosis by reminding her she was not alone in having to navigate new things, and that transformation lay in her own hands.

With her adviser's guidance, Micca's self-confidence grew. Dr. Grass suggested taking on a civic engagement project at SMC spearheaded statewide by the California Community Colleges Civic Impact Project, and championed at SMC by Superintendent/President Dr. Kathryn E. Jeffery. With a handful of PTK volunteers, Micca helped register more than 200 SMC students to vote in the 2016 local, state, and national elections.

Most of us were international students, remembers Micca. It's not like we had the right to vote—but we were so happy to get involved in this kind of civic engagement activity. Nominated by Dr. Grass, Micca was selected for the prestigious California Community Colleges Civic Impact Scholars Program in recognition of her advocacy efforts during the project.

Micca says there are three things she learned at SMC confidence, forgiveness responsibility, and gratitude.She was recently selected as one of the 2017 SMC Dale Ride Interns and will be interning at Oxfam International's Washington D.C. office this summer.

I think my character is just like my mom, said Micca. She used to keep everything inside, and let only the positive out. No one in her family had attended college. My mom graduated from high school, and my father graduated from middle school. Micca will be the first person to earn a bachelor's degree. Skepticism gradually turned into recognition. I have become a role model for my younger brother and my nephew, says Micca.

Micca graduates from Santa Monica College with an Associate degree in Public Policy. At the time this profile was written, Micca has been accepted to all the University of California campuses she applied to—UCLA, UC Berkeley, UC San Diego, and UC Santa Barbara—and was awaiting word from her top choice, Columbia University.

But I know I will shine wherever I go, she said. She would also like to help Santa Monica College by encouraging alumni—wherever she ends up—to get involved and give back to SMC, and by doing so herself. She also has a long-term career goal to be a diplomat, she wants to build bridges between China and the U.S., and at SMC, I'm getting all the skills I need.