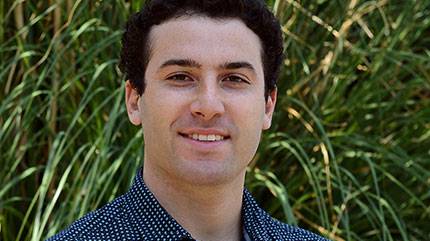 A Voice for the Future

Daniel Kolko made a choice that changed his life.

He enrolled at Santa Monica College. Then he developed an interest in public policy when he “signed up for a Poli Sci 31 class – Introduction to Public Policy – with Christina Gabler, who taught me how anyone can make a change,” he said. “She’s been there for me for this whole time, ever since I was under the radar as a part-time student. She’s one of my favorite teachers, and I really look up to her as a mentor.”

Kolko also noticed that the SMC students who seemed to be the happiest – and making some pretty good grades – were the ones who participated in student clubs and campus activities. So he talked to SMC Associate Dean of Student Life Sonali Bridges, who became “one of the most significant people in my time at SMC,” he said. “She kept an eye on me and encouraged me to get involved, and she helped give me the confidence to eventually run for office in the Associated Students Government.”

Kolko served as Commissioner of Public Policy to the 2013-14 Student Trustee. Then he was elected the 2014-15 Student Trustee, representing the voice of 33,000 students to the SMC Board of Trustees.

Kolko’s foray into public policy includes a 2013 internship at the California Climate Change Exchange – working to make people more aware of the issue of climate change and what they can do to make a difference – and a 2015 judicial office internship at the Superior Court of California, County of Los Angeles.

Kolko is also one of six students selected for the prestigious Dale Ride Internship this summer in Washington, DC. The internship program was established in 1991 in memory of SMC political science teacher and administrator Dale Ride, who had a long and distinguished career as an educator, administrator, and public servant.

Each Ride intern receives funding to cover housing, transportation, and some spending money. Funding for the internship program is provided by The Dale Ride Family Fund, the SMC Foundation President’s Circle, and the SMC Associates, a private organization that funds speakers and special programs at the college, and on top of all that, Kolko has earned an Associate in Arts (AA) in Public Policy at SMC. He will transfer to UCLA, where he will major in political science, and plans on a career in law.