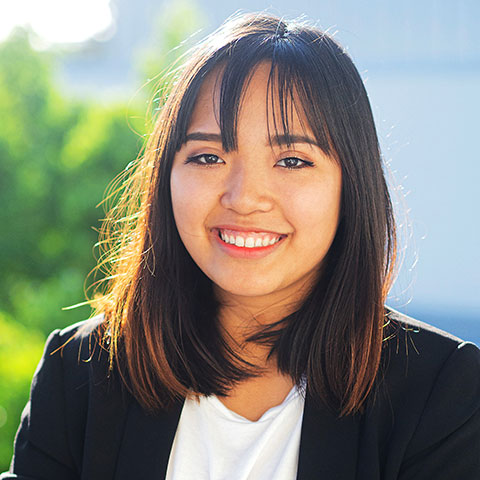 Summer Le was 18 when she left Vietnam for Southern California, where she knew only one person — a cousin who had studied at SMC before continuing at UCLA. “He told me Santa Monica College was the best school for transferring,” she said, “so that’s why I chose it.”

Journeying from a nation ruled by a single party to one where free speech is paramount took some adjusting. “Freedom of speech wasn’t a concept familiar to me,” she explained. She hesitated to speak up in class “because in Vietnam, if I said something wrong, they would judge me or my grade would go down.”

At SMC, how comfortable and even outspoken her peers were in classroom discussions “was something totally new to me,” Summer recalls. “Student voices are truly heard and appreciated here.”

She found her own voice at SMC. After hearing Summer speak before a group of 50 students in the International Student Forum (ISF), SMC counselor for international students Lydia Casillas said, “I remember thinking ‘Wow, this is a new student and she’s already up there.’”

Summer served as the ISF publicist and vice president, and organized the club’s annual tour of Northern California college campuses. She was elected ISF president in spring 2019, and then became active in the Associated Students as director of student advocacy and as a representative on SMC’s District Planning and Advisory Council.

With a hope to eventually work at the Federal Reserve Bank, Summer graduates from SMC with an Associate Degree for Transfer in Economics. She plans to transfer to UCLA and major in Business Economics, with a minor in Accounting.​