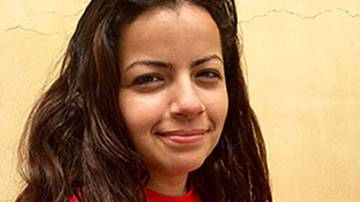 Marie Medina became a mother at 16.
She graduated from a continuation school where she wasn’t really prepared for college. A counselor from Santa Monica College came to the school and talked about resources at SMC and Marie thought, I’m a mother now – what am I going to do just work?
Her family viewed her pregnancy as a disgrace and she knew she needed to do something with her life – she wanted to build a better life for her six year old son, Dennis. But her first couple years as a part-time student at SMC would be rough – Marie was in an abusive relationship with her son’s father.

“Those years…I had a lot of emotions inside, but I didn’t want to talk to anyone about them,” she says. “With all the anger and sadness in me, I just started to read.” She slowly began to open up, make friends and get involved with programs like the Latino Center on campus.
Something unexpected happened.

“Time passed more quickly,” says Marie. “I was distracted, with homework and working at the Latino Center, and slowly, I was able to let go of this person.” She finally summoned the courage to walk out of that abusive relationship.

At SMC, Medina found a lens with which to view her life and the world.

“My problems are part of a bigger picture,” says Medina. At first, all she thought about was getting A’s but she realized that the true meaning of education was to grow as a person. “It’s learning about yourself – what can you do? How can you help others?”

She found herself in an Adelante sociology class taught by social science professor Christina Preciado, called “Latina/os in Contemporary Society.”

“I related to it and it made me feel like I matter,” says Medina. She also found strong support in the Latino Center. “Working there…it made me realize I had somewhere to go, I felt that I belonged.”

Whenever she felt like she was wasting her time in college, Medina says she would go to a counselor at the Latino Center who would help her change her mindset “in an instant.”

Today, she is clear on her life’s purpose to transform her experiences into an opportunity to help other teenagers. Medina will be transferring to her university of choice, California State University, Long Beach, where she will major in social work.

When she was going through her life’s worst struggles, Medina says she never met someone who reached out to her with affirmation that she could triumph over her circumstances. She plans on working with teenagers – those who are going through what she went through. And she wants to do this work in her own community, in Compton.

“I just held everything in,” recalls Medina about the rejection she faced in her life before she came to SMC. “I want to be there for others like me, even telling them these simple words No, you’re not stupid. There are opportunities for you, too – realize that.”