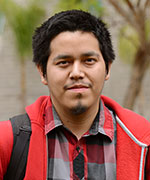 Angel Najera is a calm force to be reckoned with. His friends often ask how he keeps his composure in the face of uncertainty and he credits his family for his perseverance.

Growing up in South Bay in a low-income, single parent household was challenging. He was a high school dropout but when he came to SMC, he took the opportunity to change the course of his academic life.

He liked how SMC offered a variety of computer science classes. One of his favorite classes is computer architecture.

“I always like doing a lot of things. I like art, philosophy, sign language, computer repair and other subjects – I would go from one thing to another. I decided to do computer science and engineering because of its versatility.”

In the very beginning, Angel credits math professor Moya Mazorow knew people had different math backgrounds and helped ease the transition into his first calculus class. “I hadn’t take math in a long time so that really helped me a lot.”

Angel would visit his professor often during office hours and work with fellow students.

“Angel Najera is the reason we teach. He never gave in to frustration, self-doubt, and despair as he struggled with his classes and his life. I am so proud of how far he has come and there is no limit to where he will go,” Mazorow said

Angel is enjoying his physics class in his last semester. He took Physics professor Anthony Hall’s electricity and magnetism class and is currently in his modern physics class.

“Angel is a highly motivated and successful student. He is always pushing further, both in his conceptual understanding and technical abilities,” Hall said.

His favorite subject to tutor is also physics. "He's very good at explaining concepts in a simple way without overlooking the details. He really follows the 'explain it as simple as possible but not any simpler' approach."

Often juggling multiple math and physics class in one semester, Angel is also a STEM peer mentor and a tutor for students taking Math 7, 10, 11 and Physics 21, 22, 23.

“I will miss the STEM department and a lot the people I've met through it. I will miss some of the professors I've gotten the chance to connect with and of course, I will also miss my friends, most of whom will be transferring as well.”

His counselor Jose Cue is amazed with all he’s had to overcome, all the while maintaining a 4.0 GPA. "He has faced some formidable challenges in his life and has never given up. Instead, he has applied himself and has achieved great academic success at SMC.”

Angel will transfer to UC Berkeley to major in computer engineering. He will be the first in his family to go to college. He plans to attend graduate school.