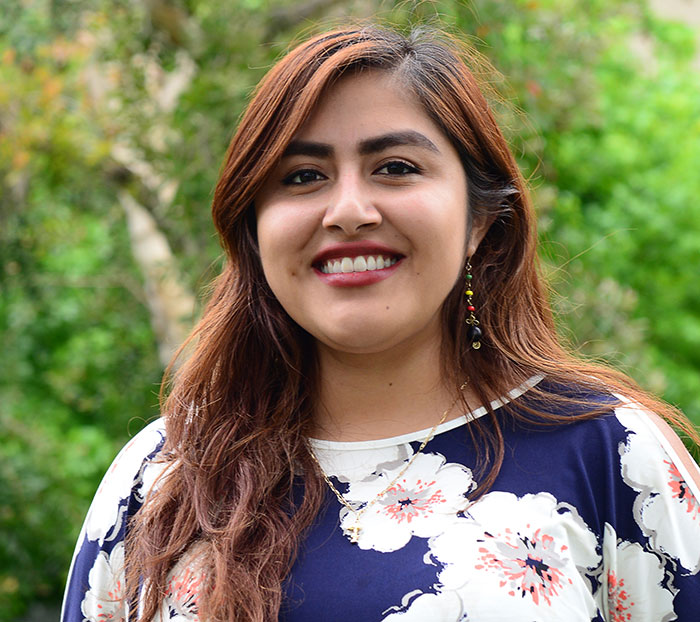 Lily Och was 14 years old when her family moved to the United States from the town of Tamahú in the Alta Verapaz area of north central Guatemala. “We didn’t speak any English when we arrived,” she said, which made the immigration officer in Florida “laugh at us when we said we were moving here to get a good education, and ask us ‘How do you plan to do that without English?’”

It was hard enough trying to fit in as a teenager, but being an immigrant—and one who was not fluent in English—in a country that can be hostile to anyone “different” made everything so much harder. Bullying was an ongoing problem. “People would actually come up to me and tell me to go back where I came from,” said Lily.

Her father was deported to Guatemala, leaving Lily and her brother with their mother. To help support her family, Lily went to work part time as a secretary while attending South Gate High School.

She excelled in high school despite her limited, but rapidly growing command of English. When she wanted to take some Advanced Placement (AP) courses, however, she encountered instructors who had little confidence in her ability to thrive in the intensive courses. After consulting with the school’s ESL adviser and the instructors, she was finally accepted into AP classes covering government and economics.

Lily graduated from high school in 2014. She was accepted at several colleges, and was even offered a substantial scholarship by CSU Northridge, but the money was not enough to cover the expenses she would face there. When her counselor recommended Lily for a scholarship to attend SMC, things started to fall into place. “My counselor told me SMC was the best place for me to come and learn and practice my English,” said Lily. “Coming here turned out to be the best choice I could make.”

In high school, she had studied political science and developed an interest in it. “I love political science,” she said. “I picked it as a major because I thought it would help me do what I like to do, which is helping others.”

Lily not only picked a major she liked, she made the most of it while at SMC. She was elected President of MEChA—which stands for "Movimiento Estudiantil Chicano de Aztlán", and means "Chicano Student Movement of Aztlán —for two semesters. She also served as Treasurer for the Pre-Law Society, one of the student clubs at SMC.

“SMC gives students so many resources,” said Lily. “They really want to help students here. There are book loans, vouchers, tutors, and programs like Adelante.” The Adelante program—offered through SMC’s Latino Center—focuses on academic achievement, transfer, cultural awareness, and personal growth, and includes courses that highlight the Latino culture and experience.

Lily has worked as assistant to the Director of the SMC Public Policy Institute (PPI) since September 2015, helping organize projects. As part of her duties, she manages the student volunteers and special guests for Westside Ballet performances of “The Nutcracker” in The Broad Stage at the SMC Performing Arts Center. The performances are a featured event during PPI’s Annual Fall Symposium.

Lily has also been an intern since August 2016 with the Santa Monica Commission on the Status of Women, and was a 2015-16 Fellow of the Young People For (YP4) Fellowship.

YP4 is a yearlong leadership-development program for young people committed to creating positive social change in their communities. Each January, YP4 holds a National Summit in Washington, DC, for Fellows to enhance their leadership skills, gain tools and resources they can use to create change through their projects, and network with leaders in the progressive movement.

As part of YP4’s Blueprint for Social Justice, each Fellow works on a sustainable project tailored to address a specific community need. “I was able to go back to Guatemala for the first time and work with my community there,” said Lily. “We were able to open the first library in our town. We focused our books on elementary school students so reading could be introduced to them from a young age.” She added, “Books are expensive there. I come from a small indigenous town, where many make so little of money, so books are not affordable to them. In the future, we plan to have technology such as computers and Internet to keep helping more students.”

Lily said she is going to miss SMC, but “I’m really excited to graduate.” She plans to attend CSU Long Beach, where she will focus her studies on global politics, political science, and international relations.