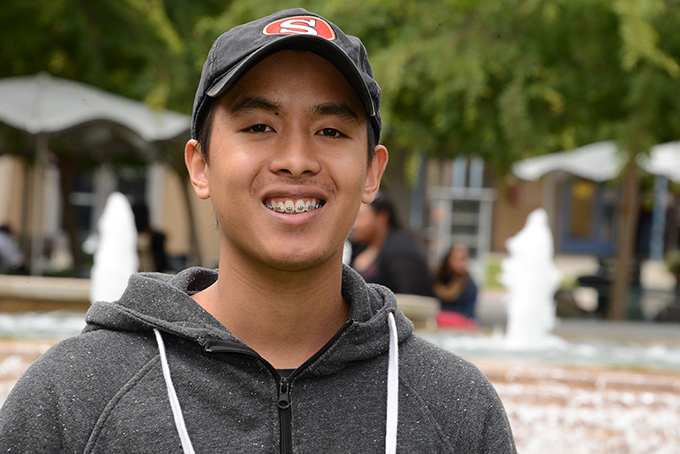 When Sure Oeng finished high school, his graduation gift was the parents’ donut shop he grew up working in as a kid. Every day after school and on weekends, he would go straight to the donut shop and help his parents prepare ingredients, clean the floors and serve customers. To this day, Oeng still helps out at the donut shop, working as the co-owner and manager of the business with his grandma. “Managing the donut shop has disciplined me and also shaped my morals, everything and who I am now,” Oeng says. His dad saw his potential in managing a business and gave him the donut shop so he’d have a fallback career in case things didn’t turn out okay. “My dad told me the donut store would be something I can always come back to,’” Oeng reflected. “It’s a gift and a burden. It’s saying ‘You’re a man now. Do something.’ Even if I questioned it, I didn’t want to say ‘no.’” His parents are Cambodian refugees who escaped the genocide of the Khmer Rouge in the 1970s. The regime resulted in the deaths of two million people due to political executions, disease, famine, and forced labor.  “If it weren’t for them, I wouldn’t be here,” Oeng says. He postponed his dream of going to college to support his family, working every day to prepare the donuts and perform accounting duties to make sure the store ran smoothly. A few years later, Oeng realized he should go back to school. Along with his twin brother and twin sisters, Oeng is a first-generation college student in his family. He enrolled in business classes because he thought he was destined to be a business owner. Oeng juggled classes and work, paying his way through SMC.

“SMC gives you the opportunity to transfer if you work hard, if you do well and it’s affordable. I encourage everyone to come to SMC.” Oeng says. “When you don’t have much money and you’re relying on yourself or your family doesn’t have enough, community college is the best option for you.” Oeng realized he needed a change in pace and began taking difference classes to explore his options. “SMC and my business showed me what my passion is,” Oeng says. He grew to enjoy communications classes. He learned about film, journalism and media studies.

Sure Oeng was such a positive force in my journalism class. He showed up early every day, participated enthusiastically and perfected his writing assignments,” journalism and media studies professor Sharyn Obsatz remarks. “He is mature beyond his years because he shouldered the challenge of running his family's business at an age when most kids are goofing off". One day, Oeng hopes to fulfill his dad’s dream of turning his dad’s novel into a film. The film will feature his dad’s experiences with the Cambodian genocide. "An important story the world needs to remember," Obsatz says. When he was younger, Oeng participated in a variety of school plays, like Romeo and Juliet, Peter Pan, Grease and Guys and Dolls. He even received a scholarship for acting in high school. “Every weekend, we had family movie nights and that has inspired me to have a career in film or television,” Oeng says. “I just love film. I love musical theatre. I love television. Anything for entertainment." Oeng is graduating with associate degrees in Liberal Arts & Social and Behavioral Sciences as well as Communication Studies. He is in the process of deciding which university to attend this fall and plans on majoring in film and media studies.

“You may not know what direction you’re going to. Focusing on doing well in school is important,” Oeng says.