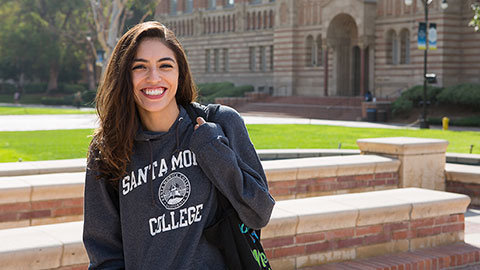 An Evolving & Shining Work of Art

Born and raised in South Los Angeles, with a Mexican dad and Salvadoran mom, Jackie grew up straddling cultures. After her parents divorced, Jackie’s mom, Ana, supported the family as a hotel housekeeper.

“I felt a huge weight on my shoulders to provide a better future for us,” says Jackie, the only one in her family to finish high school.

“I felt lesser,” she says. “Like there was something wrong with me.” Soon, she was battling anxiety and depression. She tried classes at a college closer to home, but by spring 2012, she stopped attending.

“That was rock-bottom,” Jackie recalls. “I was afraid to leave the house. I basically was a shut-in. I also developed an undiagnosed form of OCD. I had rituals around cleaning and cleanliness.”

She didn’t seek counseling or medical help. “I just decided to crawl into a little cave in my room and just hang out there for a while.”

Two years passed before Jackie found the courage to volunteer at the L.A. County Museum of Natural History. “It was a good baby-step,” she says, “close to home, and just three hours a week.”

She took a job at Universal Studios theme park in 2015, tagged along when a coworker went to enroll at SMC, and impulsively signed up for Methods of Archaeology.

That random decision changed her life.

Her instructor, SMC Archaeology Program director Brandon Lewis, would become “a mentor and a dear friend.”

Walter Meyer noticed Jackie right away when she enrolled in his Art History 1 class. “I was blown away,” says the SMC Art Department chair, “by the way she approached school with such fierce determination.”

Jackie graduated from SMC with honors and transferred to UCLA as a scholarship student double majoring in anthropology and minoring in art history. She credits Adelante Program counselor Paul Jimenez with keeping her on track.

The summer academy is a Mellon Foundation-sponsored program to build a pipeline of culturally diverse museum leaders. LACMA is one of six major museums participating in the program.

Each museum invites two summer academy participants to return in the fall as Mellon Undergraduate Curatorial Fellows. Jackie was one of LACMA’s picks.

At UCLA, she’s landed a work-study job and an internship, but she knows being paired with Dr. Little won’t be easy.

“I don’t know anything about Asian art,” she admits. “It’s going to be a steep learning curve. But I’m excited about the curatorial part and how it ties in with archaeology.”

Next summer, Jackie will also mentor a group of Mellon Summer Academy students.

Being a role model is important to her She has a message for “all the first-generation kids, the Mexican and Salvadoran and Central-American diaspora, the dropouts, women of color, people with depression and anxiety, kids from South Central, and older students and anyone else that needs to hear it,” she says.

“I want to encourage them to keep fighting! I’m out here representando a la patria and doing my best to advocate for us all. If I can do it, you can do it better. You’re more formidable than you think!”