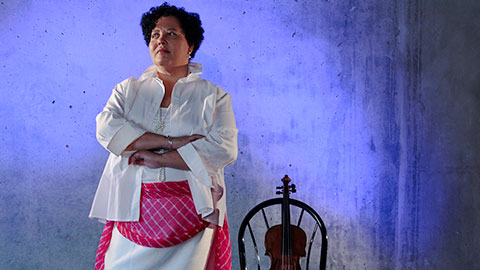 What she dreaded was tripping over her tongue. As she botched her lines again, Lesa eyed Tom Hanks warily across the set.

It was 2018, and the L.A.-based violinist and longtime SMC music instructor was recreating a scene from her past: a 1997 appearance in “Mr. Roger’s Neighborhood,” episode 1718.

“It was an extraordinary experience,” Lesa says. “We had to do a thousand takes, but everybody was so loving and supportive. Every time we played, they applauded afterwards — the film crew, everybody.”

When the filmmakers first called, Lesa couldn’t imagine why they wanted to highlight the Uptown String Quartet. It wasn’t until she saw the completed movie that she understood: Rejecting limitations had been a key message for Mr. Rogers.

“When you think about a string quartet, it’s four men in tuxes and tails playing European classical music,” she says “But maybe not. It might be four African American women playing their own compositions and reinterpreting music from the African American continuum.”

Fred Rogers was a big fan of bebop and played jazz piano himself. His friends included jazz legend Max Roach, who had put together the Uptown String Quartet in the mid 1980s to showcase his daughter Maxine’s skills. The idea was to produce a full, jazz sound using only the instruments of a European string quartet. No rhythm section. No wind instruments. The quartet was invited on “Mr. Rogers’ Neighborhood.”

“I’m biracial,” says Lesa, who grew up in a Pasadena home filled with music. “I got my introduction to European classical music through my mother. And my father was African American and Native American, so that’s where the jazz and other musical forms come in.”

Lesa fell in love with the violin at 8. She credits a cousin, jazz trumpet and flugelhorn legend Clark Terry, “for teaching me how to feel and incorporate jazz swing on the violin.”

At SMC, one of the courses Lesa teaches is Music 33, Jazz and American Culture.

“She’s an incredible teacher — the kind you’re going to remember all your life,” says Saul Isler, who graduated from SMC in 2019 at age 85. He didn’t much care for jazz before taking Lesa’s course. “But I got into it very quickly because she brought it to us in such a lively manner. She teaches with passion.”
Lesa continues to innovate with musical hybrids. In 2006, she founded the Women’s Jazz Orchestra of Los Angeles, a 21-member string and rhythm band.

She aims to transmit her aesthetic ideas to the next generation, using novel ways to create a personal connection. For her SMC jazz history classes, she has students “write a ‘blues.’ It doesn’t have to be music. They can deliver a poem or spoken-word. They can dance it or shout it. We’re talking about the human condition and what new sounds you can create to express it.”