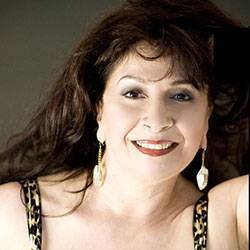 Laura Canellias is one of the foremost salsa instructors and coaches on the west coast and is affectionately referred to by many as the "First Lady of Salsa" and "L.A.'s Salsa Diva." Originally from Texas, Laura started dancing jazz, ballet and tap at an early age and continued on into musical theater where she developed her skills as an actress and stage performer. She later focused her energies on learning and teaching various social dances which encompassed everything from ballroom to swing, Latin and country & western. After moving to Los Angeles 30 years ago, she made a name for herself in the world of salsa. Her reputation and teaching skills placed her in high demand and have taken her around the globe to instruct salsa enthusiasts in Japan, South East Asia, Europe, Mexico, South America, Canada and Puerto Rico. Considered one of the pioneers of the "L.A. style on 1," she is also well versed in other styles of salsa/mambo ie: "Classic 2" and "New York 2." The recipient of multiple honors and recognized for her contributions to the salsa community, she is frequently invited to judge and teach at both local and international competitions and events. She has appeared as a featured dancer in numerous films and choreographed for television and stage.  Her love of Latin music and dance led her to produce seven CDs for Rhino Records and later went on to produce an aerobic workout program, Cardio Salsa™. She has taught at Loyola Marymount University, Cal State LA and has been a dance faculty member at Santa Monica College for the past 18 years.