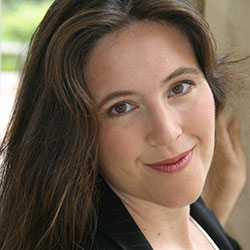 Janelle DeStefano, mezzo-soprano, has a Doctorate of Musical Arts (Pi Kappa Lambda, Honors) from the University of Southern California (USC), a Master of Music from Westminster Choir College in Voice Pedagogy and Performance, and a Bachelor of Arts (Phi Beta Kappa, College Honors) from the University of California Santa Cruz. She has taught at USC, UC Santa Cruz, the University of San Diego and Grossmont College. Praised for her “rich seamless voice” and “passionate delivery,” she has sung with San Diego Opera, Ash Lawn Opera Festival in Virginia and Opera Festival of New Jersey. Recent roles include Dido in Dido and Aeneas, Romeo in Romeo in I Capuletti e i Montecchi and the title role in Britten’s The Rape of Lucretia. Equally comfortable on the concert stage, Dr. DeStefano has rendered dramatic performances of works such as the Bach B-minor Mass, the Mozart Requiem, Beethoven's Ninth Symphony, and Mahler's Fourth Symphony. She recently appeared as the alto soloist for Bach’s Passion According to St. Matthew with the La Jolla Symphony and can be heard as the alto soloist in Handel’s Messiah with the Los Angeles Master Chorale this December in Walt Disney Concert Hall.