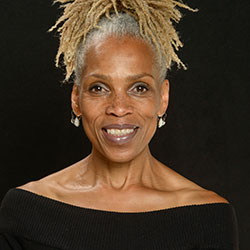 Ms. Mc Donald’s Broadway credits include Purlie, Two Gentleman of Verona, and she was featured in both The Wiz and Duke Ellington’s Sophisticated Ladies. After returning to Los Angeles, Karen began choreographing theatre shows including, Voices, Sing Out Sweet Gospel, and Show Girls for which she received an N.A.A.C.P. Image Award for “Best Choreographer.’’ She has also worked as Associate Choreographer and Assistant Director on productions such as Bigger Than Bubble Gum at the Pasadena Playhouse, the Broadway musical Don’t Bother Me I Can’t Cope (rewritten and remounted with a Los Angeles cast), and Jezebel presented at the Vision Theatre.

She has received the Lester Horton Award for “Excellence in Teaching” as well as an N.A.A.C.P. Image Award nomination for best choreographer for the theater production of Dark Legends In Blood. Karen has appeared on both stage and screen with artists such as Janet Jackson, Michael Jackson (Thriller) and Diane Reeves. Ms. McDonald joined the Debbie Allen in 2001 and is the Director of the Academy.