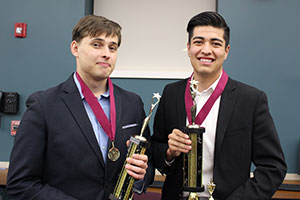 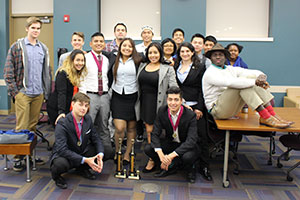 The SMC teams competed against teams from colleges and universities including UCLA, Claremont McKenna College, and LMU. There were a total of 28 teams competing, with two students on each team. The SMC team’s victory comes on the heels of a win against the Japanese debate team, in a debate on gun control held on the SMC campus on February 20.

“Our debaters are beating odds by researching as much as any student in a graduate or post-graduate school, practicing long hours, and maintaining a resilient and positive attitude,” said Luis Andrade, SMC Communication professor. “Our team victories are victories for our entire department and college.”

The tournament featured four preliminary debates and a final debate, the topic of which was whether existing welfare programs should be replaced by unconditional cash transfers. In addition to the team that won first place at the LMU California Cup Tournament, a number of other SMC teams and debaters won prizes as below:

View a YouTube video on the SMC Debate Team.