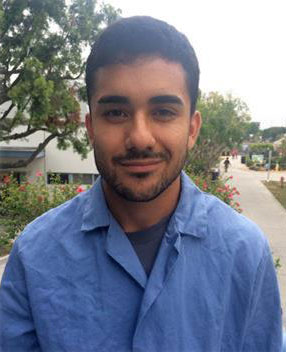 Santa Monica College (SMC) is pleased to announce that the American Chemical Society (ACS)—the world’s largest scientific society—has selected SMC student Carlos Vasquez as one of its ACS scholars. The ACS Scholars Program awards scholarships, renewable annually, of up to $5,000 to underrepresented minority students who want to enter chemistry or chemistry-related fields. Vasquez is one of approximately 130 scholars selected from a large pool of applicants nationwide.

Vasquez is transferring this fall to the University of California, Irvine (UCI). While he was accepted into UCLA and UC Berkeley, Vasquez says he chose UCI because he was selected to participate in its Bridges to Baccalaureate Program and the Minority Health and Health Disparities International Research Training (MHIRT) program. As a participant, Vasquez will be a paid research intern, working closely with an academic adviser and doing biomedical research at UCI.

“The American Chemical Society congratulates Carlos Vasquez on becoming an ACS Scholar; we wish him the best as he continues his education and commend him for his dedication and hard work,” said Donna J. Nelson, ACS President. “Carlos is a fine example of the next generation of scientists, who are critical to the U.S. maintaining its position as a leader in science.”

A native of South Central Los Angeles, Vasquez went to the University of Chicago straight out of high school as an accounting major. But he dropped out half a year later. “I could not afford the tuition,” he says. “I was going to end up with $40,000 in student loan debt.” He decided he did not want to put himself—or his parents—through that.

He returned to Los Angeles, and enrolled at SMC. He began by taking business accounting courses, but his life would be completely changed when he enrolled in a Chemistry 10 (Introductory General Chemistry) class taught by SMC Chemistry Professor Muriel Walker Waugh.

“My eyes were opened up to how interesting chemistry was,” says Vasquez, who did not enjoy chemistry in high school. Because of SMC’s “fabulous teachers who have been so influential in [my] life,” he realized he wanted to change his focus and enrolled in organic chemistry classes instead. He even became a “supplementary instructor (SI)” leader, a student tutor who helped other students comprehend course material.

“This young man has been a bright star in the Physical Science Department,” said Professor Waugh, who wrote a letter of recommendation to the ACS Scholars Program for Vasquez. “As my SI Leader and tutor, he guided many of my students to success. He is the one person I ask to teach students individually when they are the most confused.”

Jamey Anderson, Chair of the SMC Physical Science department, said that Carlos “exemplifies the very best of Santa Monica College.” “There are few students who have his natural gift for science,” said Anderson, “and fewer still with the genuine curiosity Carlos has to learn all he can, above and beyond what is needed for top grades.”

Vasquez also competed in inter-collegiate track and field events for SMC, and volunteered in the community as a member of the Alpha Gamma Sigma honor society.

“SMC has been the best thing in my life,” says Vasquez. “Now I know everything happens for a reason. If I was still at the University of Chicago, I would be in debt, and doing something that I do not love. I would not have discovered chemistry if not for SMC.”

His future plans include either a PhD in Organic Chemistry, or an MD-PhD to become a physician-scientist who “does pure research, most likely on how drugs affect the human body,” says Vasquez.

The ACS Scholars Program was established in 1994 to attract African American, Hispanic, and American Indian students considered underrepresented in the chemical sciences by the National Science Foundation to pursue careers in the field. Scholarships are awarded on the basis of criteria including academic record, financial need, leadership ability, and community service. For more information, visit www.acs.org.

Visit www.smc.edu/chemistry for information on general chemistry, organic chemistry, and biochemistry classes available at SMC, and www.smc.edu/ClassSchedule to sign up for these classes for the summer and fall semesters.