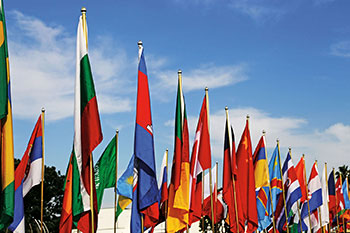 Santa Monica College (SMC) is pleased to announce that it has received a Senator Paul Simon Award for Comprehensive Internationalization from NAFSA Association of Internal Educators. Along with Florida State University, the University of Iowa, and the University of Pittsburgh, SMC was recognized for “excellence in integrating international education throughout all facets of university and college campuses.”

Santa Monica College (SMC)​ is pleased to announce that it has received a Senator Paul Simon Award for Comprehensive Internationalization from NAFSA Association of International Educators, the world’s largest nonprofit international education and exchange association. SMC—along with Florida State University, the University of Iowa, and the University of Pittsburgh—were recognized in the award named for late Senator Paul Simon, a five-term Democratic congressman and two-term senator from Illinois.

“All of us at Santa Monica College take great pride in our success in cultivating a truly global campus environment,” said Dr. Kathryn E. Jeffery, SMC Superintendent/President. “Every member of the SMC community—especially students—is actively aware of the wonderful opportunities of living in an interconnected society where we share in the responsibilities of striving for a common good, and learning about each other in the process. This distinctive award from NAFSA is confirmation of Santa Monica College’s commitment to diversity at every level.”

The recipients of the 2017 Senator Paul Simon Awards for Campus Internationalization were recognized for “excellence in integrating international education throughout all facets of university and college campuses,” according to an official statement from NAFSA. In addition to the four recipients of this award, three other institutions—Spelman College, Texas Christian University, and the University of North Texas—were awarded the Senator Paul Simon Spotlight Award for specific international education programs or initiatives that contributed to broad internationalization of a campus.

“We are thrilled to award NAFSA’s highest commendation to these seven colleges and universities for their remarkable efforts to implement internationalization on their campuses,” said Esther D. Brimmer, NAFSA Executive Director and CEO. “Through their hard work and dedication, each of these campuses has demonstrated how U.S. higher education institutions can succeed at fostering a globally connected and welcoming community using a variety of methods. It is through the continued commitment and innovation of institutions like these that we can ensure a future of greater collaboration and shared progress across the world.”

Championed by SMC President Emeritus Chui L. Tsang, a faculty task force began a campus-wide effort in 2008 to create the Global Citizenship Initiative. Today, the initiative funds $75,000 annually in student scholarships for study abroad programs for low-income students, and faculty grants for campus lectures and events. Overseas professional development has enabled SMC professors to travel to destinations like Salzburg, China, and Turkey to integrate a global perspective into their curriculum.

SMC has a robust study abroad program, which offers summer and winter field studies courses in Latin America and South Africa, as well as shorter ten-day courses in locations like England, South Korea, Denmark, and Russia. The College also features a “global citizenship” requirement for students pursuing an Associate of Arts degree; three units of coursework in American Cultures, Ecological Literacy, Global Studies and/or Service Learning are required. The Global Citizenship Initiative selects an annual theme around which special events and a symposium are organized (this year’s theme is “gender equity”).

“Santa Monica College stands as a model among community colleges for comprehensive campus internationalization, and the Senator Paul Simon Award is the second of two major awards received this year alone for our innovative efforts—we also received an inaugural 2017 Andrew Heiskell Award for Innovation in International Education from the Institute of International Education,” said Kelley Brayton, SMC Dean of International Education. “The success in creating a collective institutional vision, which the College then adopted as a priority, is truly commendable. The credit goes to scores of faculty, staff, and administrators who created this approach to allow our diverse student body to develop a global perspective.”

SMC and the other award recipients will be honored at an event in Washington, D.C., during International Education Week in November. To learn more about NAFSA’s Senator Paul Simon Awards, visit www.nafsa.org/SimonAward. More information about the Global Citizenship Initiative at Santa Monica College is available at www.smc.edu/globalcitizenship.

Santa Monica College is a diverse minority-serving institution with the second highest international student population among community colleges in the nation with 3,400 students from over 100 countries worldwide.