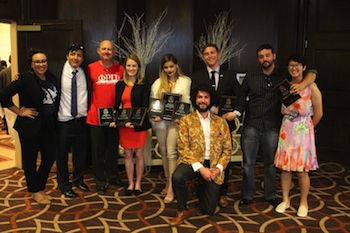 “There is no substitute for talented and motivated students…when those students find us, we can win,” said SMC Speech and Debate Coach Nate Brown. “I’ve seen that competitive speech and debate is the greatest learning experience for students. They learn a number of things: current events and issues; how to argue logically and passionately; how to speak effectively and appropriately; and how to be ethical communicators and supportive team members. And, perhaps most importantly, they learn self-confidence.”

The eight awards mark SMC’s most successful record at the Phi Ro Pi nationals. A complete list of the awards and recipients follows:

The SMC Speech and Debate team also won a Silver sweepstakes team award in the Wheeler division. In addition, the other members of the team who competed in various categories including persuasive speaking, extemporaneous speaking, and impromptu speaking are: Andrew Monaco, Frankie Duan, and Albert Cueva.

“Seeing our students win is a great joy,” said Brown, “but seeing them develop confidence in themselves even when they don’t win is perhaps the greatest joy we can have as coaches.”

The SMC Speech and Debate Team is coached by Communication professors Luis Andrade, Brianna Broady, and Nate Brown. The team's trip to the Phi Ro Pi nationals was made possible by funding from the SMC Foundation. For more information on the SMC Debate Team, contact Luis Andrade at andrade_luis@smc.edu or 310-434-4771. To learn more about the Phi Ro Pi National Forensic Organization, visit www.phiropi.org.