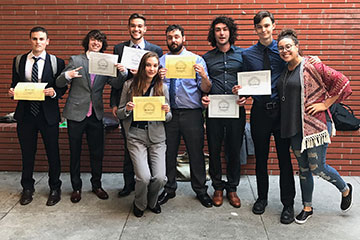 Seven of the 14 SMC students who competed won high-level awards in International Public Debate Association (IPDA) debate, in which each competitor engages in four rounds of one-on-one debate, with only 30 minutes to prepare before each round.

SMC students Ben Kolodny (Team Captain), Baylynne Brunetti, and new debate team member Kyle Lee each received a “Superior” award for winning all four of their rounds, unusual for even the best debaters. In addition, Andrew Monaco and new team members Gray Levine, Ethan Bass, and Nicholas Graves each won an "Excellent” award for winning three of their four rounds.

“The tournament was a great experience,” said Kolodny. “We got to talk about some really important issues, hone our communication skills, and prepare for fierce competition on the road to the national championship. The best part of being on the team though, is the community. We're really close, and the great performances we saw on Saturday would've been impossible without help from our friends."

More than 140 students from 13 public and private two- and four-year institutions in Southern California participated in the competition. The SMC team’s presence at the competition was sponsored by the Associated Students of Santa Monica College.

"Speech and Debate taught me how to better express empathy towards others,” said team member Edward Lee. “I realized at the end of the day, debating should be having a fun discussion where everyone comes out feeling happier at the end. No only did my experience make me a more persuasive speaker, it taught me how important it is to show empathy towards others' concerns."

“Every Fall we start fresh, with many new team members who need training and who are hoping to succeed in competition,” said SMC Communication Professor Nate Brown, who coaches the team along with SMC Communication professors Luis Andrade and Brianna Broady. “Last year was our most successful year ever, which was only slightly better than the year before that. If this first tournament of our 2017-2018 year is any indication, we could be looking at another record-breaking year. But even if that doesn't happen, I love this team already, and I have no doubt it will be a year of great communication, powerful argumentation, and bonding friendships."

For more information on the SMC Speech and Debate Team, contact Professor Brianna Broady at broady_brianna@smc.edu.