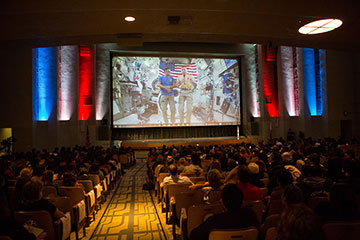 NASA Astronaut Randy Bresnik (right) answering questions by SMMUSD and SMC students. Bresnik was an Samohi senior when he took a Russian class at SMC—language training that would serve him well as Commander of ISS Expedition 53.

SANTA MONICA, CA — It’s not every day that astronauts circling the globe in the International Space Station (ISS) take time out from space walks and science missions to talk to elementary, middle school, high school, and college students, live from space.

Over the years, Randy stayed in touch with Samohi administrators. Catherine Baxter, Dean of Students, applied for this high-tech downlink from the ISS, orbiting 250 miles above Earth, and with Randy’s support NASA agreed to set it up.

Randy Bresnik calls Santa Monica his hometown—his father still lives here and was present for the downlink. During a recent flyover, he tweeted a photo of Santa Monica from space, pointing out his two alma maters: Samohi and SMC.

Nicknamed “Komrade” Bresnik, during his senior year at Samohi, Randy was a dual-enrollment student studying Russian at SMC, language training that would serve him well as Commander of ISS Expedition 53. Launched from Kazakhstan via Russia’s Soyuz MS-5 spacecraft in July 2017, he shared the ride with his crewmate, Russian cosmonaut Sergey Ryazanskiy.

Commissioned as a Second Lieutenant in the U.S. Marine Corps in 1989, Randy became an astronaut in 2004 and has led three maintenance and repair EVA (Extra Vehicular Activity) spacewalks outside the ISS during Expedition 53.

Because they, too, graduated from Samohi and are SMC students, Jesse Torres and Nicholas Rodriguez, who are enrolled in SMC’s STEM (Science, Technology, Engineering, Math) program, were selected to address questions to Randy, their fellow dual alumnus.

Jesse, an Aerospace Engineering major, asked what Commander Bresnik’s greatest training challenge has been. “He answered that he was the flight engineer or co-pilot on the Soyuz spacecraft,” Jesse said, “and having to learn about that spacecraft all in Russian was his biggest challenge. He said it starts small, you take it step by step and he was helped by that fact that Sergey Ryazanskiy got his PhD at UCLA.” UCLA is Jesse’s first choice for transfer; he wants to get a Master’s Degree, and hopes to find work at a government aerospace facility or a university.

Unfortunately, time ran out before Nicholas, a Physics major who enrolled in the Marine Corps at age 19 and serves in the Marines Reserves, could ask Randy how his Marine Corps training helped prepare him for this ISS expedition. But, he said, “I was just happy to be able to see behind the scenes, and to watch the interaction between the students and the astronauts on the computer screen. I never thought I’d have that kind of live connection or be close enough ever to see something like this.”

Other students asked what space smells like – “Cream of Mushroom Soup,” responded Randy – and whether dreams in space are different. Joe Acaba replied that now in his dreams, walking feels like floating.

Both Jesse and Nicholas are part of SMC’s Science &amp; Research Initiative (SRI) featuring specialized STEM courses, free counseling and tutoring, workshops geared towards equipping students for success in STEM careers, opportunities for internships with NASA, JPL and UCLA…and more. The program is funded by a $6 million grant from the U.S. Department of Education to increase the number of Hispanic and low-income students interested in pursuing STEM careers or transfer.

Dr. Kathryn E. Jeffery, President/Superintendent of Santa Monica College attended the downlink. “We’re grateful to Santa Monica High School and NASA for including SMC’s STEM students in this unique and memorable opportunity to interact with an astronaut live from space. An added bonus is that he shares their background of being from our local community. I am certain this experience will have lasting impact on Jesse and Nicholas as they move forward in their educational and professional lives. And with pride they will transmit their excitement and encouragement to fellow STEM students.”

In addition to Randy Bresnik, two other astronauts were educated at SMC. In 1968, Walter Cunningham was a Lunar Module Pilot for the Apollo 7 mission and the third civilian astronaut in space. In 1983, Sally Ride became both the first American woman and the youngest American astronaut in space, flying on the orbiter Challenger. Jonny Kim, a recently announced member of the astronaut candidate class of 2017, graduated from Santa Monica High School in 2002. Follow NASA’s twitter feed for videos from the ISS downlink.

Santa Monica College is the leader among California’s 114 community colleges in transfers to the University of California, USC, and Loyola Marymount University. SMC also offers 110 career-focused degrees and certificates—in fields such as Early Childhood Education, Game Design, Animation, Film Production, Accounting, and many more—which prepare students for direct entry into the job market or for transfer.