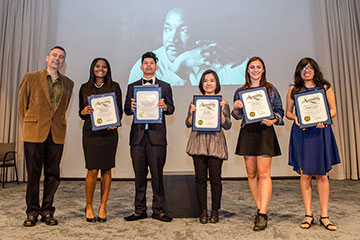 This year’s awards recipients are:

Also, Santa Monica High School student May Kono received a 2018 Honorable Mention Award from the Rev. Dr. Martin Luther King, Jr. Westside Coalition. Her goal is to work in the film industry as a screenwriter who can inspire people to create change, especially in matters like Asian representation in American film, the environmental crisis, and nuclear weapons abolition. Ms. Kono also enjoys playing in her school’s Symphony Orchestra, and writing in her free time.

Each year, schools, churches, and youth groups invite college and high school students to submit an essay, poem, or other creative work that exemplifies the “Six Principles of Nonviolence” in Dr. King’s Stride Toward Freedom. The awards are supported by endowments established in memory of local community activists and managed by the Santa Monica College Foundation.

To find out more about the Education Awards or to help support the awards, please call the SMC Foundation at (310) 434-4215.