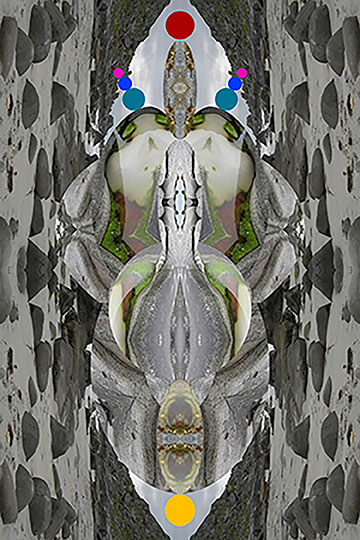 Karlsen, who earned her MFA at University of Wisconsin/Madison, is Professor of Art at SMC. She uses glass, ceramic tile, mosaic, metal, and a variety of other permanent materials to create pieces that offer “an extraordinarily wide range of insights, ideas, variety, freshness, and technical experimentation,” said Fuglie.

Since 1992, Karlsen has completed more than 27 public and corporate arts commissions in various locations, including the North Hollywood Red Line Station; the Nordhoff Orange Line Extension Station in Chatsworth, California; FBI Headquarters and the Kedzie Brown Line Station in Chicago, Illinois; Trailside Elementary School in Anchorage, Alaska; Michigan State University’s Case Hall in East Lansing, Michigan; the Raymond Renaissance in Pasadena, California; and the Capitol Area East End Complex in Sacramento, California. Her work also appears aboard Royal Caribbean’s Oasis of the Seas, Allure of the Seas, Harmony of the Seas, and Symphony of the Seas.

“A bright thread running through Karlsen’s studio work done in a variety of styles and media is what she calls ‘my autobiographical inquiry,’” said Fuglie. “A child of Norwegian immigrants, her identity becomes a conduit for connecting to important subjects, including ethnic and cultural legacies, gender issues, social topics, mythological archetypes, and the cumulative weight of history and culture. Other interests driving Karlsen’s art are the multi-level nature of the observable world and the ‘visual information overload’ of modern life. She is indeed an artist for our times.”

Karlsen’s work in the North Hollywood Red Line Station was listed in Art in America’s “Best Public Art of 2001.” Two of her other works – “Subdivisions” (2009) a colored glass curtain wall at the Lawndale Public Library in Lawndale, California; and “Wheels” (2010) in the Santa Monica Place Parking Structure – were named Best National Public Art by the Americans for the Arts/Public Arts Network. “Wheels,” a photomontage of the Ferris wheel on the historic Santa Monica Pier, was cited as a work whose artist took risks in creating signature pieces that play with scale.

Karlsen’s studio work, which has been featured in more than 100 solo and group exhibitions in the United States and Europe, can be found in the permanent collections of museums that include the Grunwald Center for the Graphic Arts at the UCLA/Armand Hammer Museum in Los Angeles, California; the Carnegie Institute Museum of Art in Pittsburgh, Pennsylvania; the Brooklyn Museum in Brooklyn, New York; the Museum of Fine Arts in Boston; Massachusetts; the Milwaukee Museum of Art in Milwaukee, Wisconsin; and the Kulturverwaltung Stadt Salzburg, Austria.

Karlsen is also a public art consultant who has written two public art redevelopment plans. The Westside Urban Forum awarded her the Westside Prize for her work on the Santa Monica Boulevard Master Plan for the City of West Hollywood, California.

Exhibits, receptions, and gallery tours and talks are free.