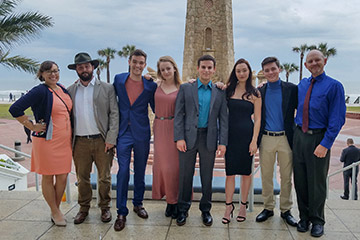 "Being on the debate team this year has been especially rewarding, and Phi Rho was the culmination of all of the time and effort that we have put into debating,” said Graves. “I couldn't ask for better teammates and coaches. Without them, there's no way that I could [have found this] success.”

Mishkin added that attending the Phi Rho Pi nationals was a “once in a lifetime experience.” “The tournament provided opportunities for both intellectual challenge and fun,” he said. “Joining the debate team has been the highlight of my time at SMC, and it was particularly rewarding to see all of our hard work pay off at the national championships.”

SMC Debate Team Captain Ben Kolodny—who won Bronze in IPDA last year at the nationals—said that the team had worked “literally hundreds of hours in practice” leading up to the nationals. “While I didn’t do as I wanted as a competitor, my team thrived. And that’s a win for any team captain,” Kolodny said.

The team’s success at the national tournament follows multiple awards at the Hornet Invitational held at Fullerton College on April 7 and also at two February tournaments: the Tabor-Venetsky Tournament at Cerritos College, and the Pacific Southwest Colleges Forensics Association which took place at California State University, Long Beach.

For more information on the Debate Team please contact Nate Brown at Brown_Nate@smc.edu. In addition to receiving support from SMC, the Debate Team has been financially supported by the Santa Monica College Foundation and the SMC Associated Students.

Phi Rho Pi, the National Junior and Community College Forensic Association and Honor Society is a non-profit organization committed to increasing knowledge and appreciation of the forensic arts at the junior and community college level. It also happens to be one of the oldest forensics organizations, and was founded by Texan Sylvia Mariner in 1927. Phi Rho Pi organizes the only full service national tournament in the United States for two-year colleges. More information is available on their website at phirhopi.org.

Santa Monica College is a California Community College accredited by the Accrediting Commission for Community and Junior Colleges (ACCJC) of the Western Association of Schools and Colleges (WASC). Santa Monica College is the leader among California’s 114 community colleges in transfers to the University of California, USC, and Loyola Marymount University. SMC also offers over 110 career-focused degrees and certificates—in fields such as Early Childhood Education, Game Design, Animation, Accounting, and many more—which prepare students for direct entry into the job market or for transfer.