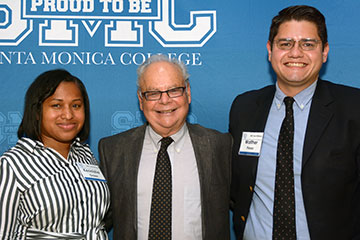 Dan Stewart — alumnus of Santa Monica College, UCLA, Harvard Law School, and the University of Oxford—was the keynote speaker. Stewart is the former associate dean of Loyola Law School, and is on the advisory council for the SMC Law Pathway Program. He instituted the Daniel L. Stewart Pre-Law Pathway Scholarship, which provided $750 scholarships to six Law Pathway students.

At the May 29 celebration (which was made possible by donations from the Law Pathway Advisory Council) two of the students — Kennisha Green and Walther Perez — addressed the crowd. Green, who is also an employee at SMC and recently graduated from Cal State LA with a Bachelor of Science in Criminal Justice, spoke about what drew her to the field. Her father was murdered when she was in the third grade and she wanted justice for herself and her family. She survived personal setbacks including a battle with depression, and returned to pursue higher education after a 10-year break because she wanted to be an example for her nephews.

“I could not tell them they need to go to school and ‘follow your dreams’,” said Green, who wants to start a nonprofit that will provide mentorships and wraparound services for elementary school children. “And another one of my goals is to restore the black community and help those who have been incarcerated, provide them with tools they need to really get a second chance.”

Green said that SMC’s Law Pathway Program made her feel deserving of the opportunities that await her. “I gained so much confidence and learned so much through my internship at the Interfaith Refugee and Immigration Service,” said Green, adding that the internship “opened [her] eyes to other things.” She is considering a career in immigration law, and is currently in the process of applying to Southwestern School of Law and Loyola Marymount University.

Walther Perez — who is transferring to UC Irvine to study philosophy and economics — plans on going to law school after that. “Hopefully Harvard or Yale – if I work hard enough.”

Born in Tlaquepaque, Mexico, Perez immigrated to the U.S. at the age of four and grew up in South Central Los Angeles. He graduated from Crenshaw High School but was not planning to attend college because of his undocumented status. A friend persuaded him to visit a college campus—one thing led to another, and an admissions staffer helped Perez start the paperwork for AB540, which allows undocumented students who qualify to attend public colleges and universities. That is how he ended up at Santa Monica College.

Perez became an active member of the SMC community—as a leader in student government, vice president of the student-run Adelante Club, and more. And he joined The Law Pathway Program, which connected him with Ana Graciela Nájera Mendoza, a staff attorney with the ACLU's Education Equity Team.

Perez began interning at the ACLU as an intern under Mendoza’s supervision. “It’s quite literally my dream job.” He plans to apply for a job with the ACLU after law school to “create more change that I want to see in my local community.” Of SMC’s Law Pathway Program, he added, “They have really, really guided me here.”

Edna Chavarry, Director of Academic Affairs Initiatives at SMC and the administrative lead for the Law Pathway, spoke about the opportunities the students received. “While in the program, they took an experiential class that provided them the opportunity to work alongside local Los Angeles attorneys – learning about the law not only in the classroom, but in the field,” said Chavarry. She proffered some instances of advisory councilmembers giving students “unique access.” “Such as when Judge Bobbi Tillmon welcomed students to her chambers, or when David Helfant hosted them onsite at a photoshoot to experience entertainment law in practice.”

The students also participated in a law school exploration workshop for community college and/or first-generation college students at the USC Gould School of Law. In addition, they joined Soros Justice Fellow Frankie Guzman (he is Director of the California Juvenile Justice Initiative at the National Center for Youth Law) in a conversation about his work to eliminate the practice of prosecuting and incarcerating children in California’s adult criminal justice system.

SMC formed the Law Pathway Program after joining the California Law Community College Pathway to Law School Initiative in 2015, a collaborative effort between California Law, The State Bar of California’s Council on Access &amp; Fairness and 29 community colleges and 8 law schools. The collaborative was designed to help diversify the legal profession and smooth the path to law school for underrepresented students. Thuy Thi Nguyen—current president of Foothill College and former Interim President and CEO of the Community College League of California—was the architect of the Initiative, and the founding board chair of California L.A.W. Pathway, the nonprofit that coordinated this unprecedented “2+2+3” program.