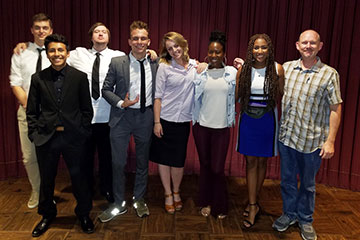 Five of the nine SMC students who competed won high-level awards in International Public Debate Association (IPDA) debate, in which each competitor engages in four preliminary rounds of one-on-one debate, with only 30 minutes to prepare before each round. Thirty-seven students from nine two- and four-year institutions from Southern California, Arizona, and Illinois participated in the tournament.

Alexys Davis reflected that debate has taught her life lessons. “Some of the rounds that you feel completely strong about may be some of the rounds [where] you showcased more of your weaknesses,” she said. “Debate has taught me to be more optimistic about my strengths and weaknesses and encouraged me to be more level headed about how I formulate and distribute my talking points."

Dominic Smith said that engaging in competitive debate has enabled him to “refine not only myself but how I reach people.” “Before winning gold at the Crossman Invitational, I was a bit shaky. Now, I'm motivated!" he added.

"I believe if you don't stand for something, you will fall for anything,” said third place winner Layla Akbar-Grant. “Debating is a great way to practice standing your ground as someone else is trying to disagree with you. Applying these skills to my future path in law is going to give me a thicker skin, a more open mind, and respect for other people's opinions."