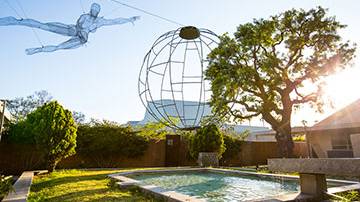 The courtyard of Santa Monica College’s Art Complex at its main campus in Santa Monica. SMC has received a $100,000 grant from the National Endowment for the Humanities grant for an art history project spearheaded by SMC professors Briana Simmons and Walter Meyer, entitled “Mapping and Preserving the Hidden Histories of Santa Monica”. SMC’s grant was the largest NEH award granted in Southern California. (Photo Credit: Amy Williams)

SANTA MONICA, CA—Santa Monica College (SMC) has received a $100,000 grant from the National Endowment for the Humanities (NEH) for an art history project entitled “Mapping and Preserving the Hidden Histories of Santa Monica” to be spearheaded by SMC professors Briana Simmons and Walter Meyer. The announcement was made in a Dec. 12 NEH press release; SMC’s grant was the largest award granted in Southern California.

The NEH announced a total $14.8 million in grants to support 253 humanities projects in 44 states, the District of Columbia, and Puerto Rico; an additional $47.5 million was awarded to fund 55 state humanities council partners. SMC will use the $100,000 NEH grant to fund a three-year curriculum development project that will create a digital database of art history narratives of a region including Santa Monica, Venice, and Malibu—but with a special emphasis on telling stories not often told, or heard.

Professors Meyer and Simmons will lead SMC students in developing the database, researching locations such as the Inkwell (a Santa Monica beach that was designated for African-American citizens, and where SMC student Nick Gabaldón and others helped challenge Jim Crow racism and open public beaches for all). The digital research and archiving project will align with eight Art History courses—SMC’s Art History program serves around 2,000 art and non-art majors each semester—and the database will be made available to students of other humanities courses at the college.

“Santa Monica College is constantly seeking ways to move beyond the established narrative and to push the envelope in how we prepare our students to become responsible and creative scholars,” said Dr. Kathryn E. Jeffery, SMC Superintendent/President. “I am enthusiastic about the potential that this project championed by our Art History professors bears to do just that, while creating a vital, inclusive repository of diverse stories not often heard.”

Briana Simmons—who holds a PhD in Latin American Art History from UC, Santa Barbara—said that the motivation for this project was “to develop a more contemporary strategy for engaging Santa Monica College’s diverse students and to help them forge a deeper connection with art history, and to see themselves in the stories they will help tell.”

Simmons and Meyer will work with local community organizations such as the City of Santa Monica, the Santa Monica History Museum, the Santa Monica Conservancy, and the Social and Public Art Resource Center (SPARC) founded by artist/scholar Judith Baca, to identify the best locations for research. The art, architecture, and history of the locations will be integrated into the research project, which will be a part of a series of SMC’s Western Art History and Latin American Art History courses; Art Appreciation: Introduction to Global Visual Culture; Art of Asia (Prehistory to 1900); and Introduction to African Art History.

Simmons’ partner in the project, Walter Meyer—who holds a Master’s degree in Art History from the University of Southern California, and is the Art History faculty lead at SMC—will help coordinate the college’s relationship with community partners, and collaborate with other humanities departments at SMC to expand the reach of the database that will be created.

“It is tremendously exciting to further develop the digital humanities at SMC and to think of all the benefits this research project will create,” said Meyer, “not just for the students who will help develop the digital database, but for the entire community who will, as a result, see Santa Monica and West Los Angeles in a whole new way!”

Grant awards from the NEH will support humanities initiatives at a wide swath of institutions: historically black colleges, Hispanic-serving institutions, and more. Other Southern California recipients included Natalie Operstein of UCLA who received $60,000 for a linguistic analysis of Lingua Franca (a language used for interethnic communication in the Mediterranean from the medieval period to the 19th century); Satoko Shimazaki of USC who will research and write a book on the impact of new recording technologies on Japanese kabuki theater in the late 19th and early 20th centuries; and Vanguard University, who received $98,317 (the second largest grant award to a Southern California recipient) to develop and implement a summer bridge program based on American history and culture for at-risk students.

“From cutting-edge digital projects to the painstaking practice of traditional scholarly research, these NEH grants represent the humanities at its most vital and creative,” said NEH Chairman Jon Parrish Peede. “These projects will shed new light on age-old questions, safeguard our cultural heritage, and expand educational opportunities in classrooms nationwide.”

For a full list of grants by geographic location and to read the NEH’s official press release, go to neh.gov/news. For more information on Santa Monica College’s art history research project, write Briana Simmons at Simmons_Briana@smc.edu.