SMC Leads in Transfers to UC for 28th Year 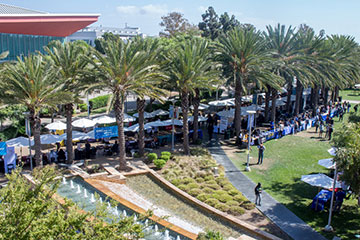 In 2017-2018, SMC sent 1,289 students to UC campuses—an all-time high for the college. The No. 2 and No. 3 feeder colleges both sent 938 students. SMC also held the top spot for the number of African-American and Hispanic students who headed to UC campuses: 54 and 199 respectively.

“I congratulate Santa Monica College on transferring yet again a record-high number of students to the University of California,” said Han Mi Yoon-Wu, UC’s interim associate vice president and director of undergraduate admissions. “The university is strongly committed to the success of transfer students and recognizes their hard work and tenacity in getting admitted to UC. Year after year, we are continually impressed by Santa Monica College’s efforts to academically prepare students and appreciate the strong collaboration between UC and the California Community Colleges.”

“Each year, we await these numbers eagerly,” said SMC Superintendent/President Dr. Kathryn E. Jeffery, “and we are so proud to see how the sincere commitment and deep investment Santa Monica College makes in supporting each student’s success—through unparalleled classroom instruction, hands-on counseling support, and a campus culture that tells students “Yes, you can!”—continues to show rich rewards. Again, we celebrate the accomplishment of SMC students who transfer seamlessly to four-year colleges and universities, and thank everyone who has been a part of their academic pathway!”

Janet Robinson, who heads SMC’s Transfer Center, stated that one reason for the increase of SMC transfer numbers was the University of California’s focus on growing the number of community college students across the UC system.

“SMC’s strong transfer numbers are what they are because of a campus-wide culture and commitment to transfer,” said Robinson. “This college offers a plethora of transfer-related activities—workshops, weekly visits to campus by university representatives, and our once-a-semester amazing college fairs.”

This past academic year, SMC also became the first California community college to have a dedicated onsite transfer services program manager from Arizona State University, for students who are interested in transferring to the university or who are concurrently enrolled in an online ASU program.

Per UC data, UCLA continues to be the most popular destination for SMC students, with 504 of them—or 39 percent of UC transfers—going to the Westwood campus in Los Angeles. UC San Diego was next with 182 transfers, followed by UC Santa Barbara with 161 transfers.

Find more information about SMC’s Transfer Center and its services or email Robinson_Janet@smc.edu.