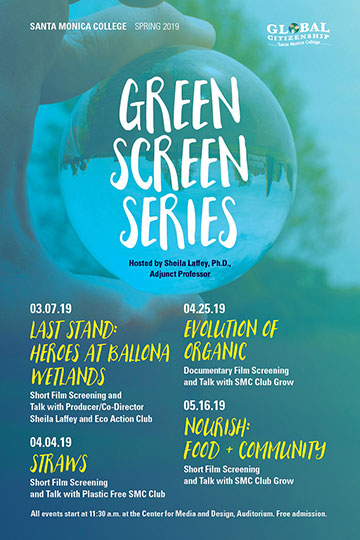 SANTA MONICA, CA — Santa Monica College (SMC) continues the Green Screen Series this spring at the SMC Center for Media and Design. The informative series of free film screenings and discussions are hosted by SMC adjunct professor Sheila Laffey as an extension to her course, Green Screen: Films on the Environment and Transformation.

All presentations in the series will be held at 11:30 a.m. in Auditorium 180 at the SMC Center for Media and Design (CMD), located at 1660 Stewart Street, Santa Monica. Unless otherwise noted, all presentations are sponsored by SMC Global Citizenship. Seating is strictly on a first-arrival basis.

Street parking is available by the Center for Media and Design, but extremely limited. Attendees are encouraged to arrive via the Expo line, the bus, or a ride-sharing service.

• April 4, 11:30 a.m. – Documentary Film Screening and Q&A: “Plastic Free SMC Club: Straws.” Directed by Linda Booker, with a colorful animation of the history of beverage straws narrated by Oscar winner Tim Robbins, Straws (30 min.) is a short film that makes clear the problems caused by plastic pollution — including the 500 million plastic straws used and tossed per day in the U.S. alone — and empowers individuals to be part of the solution. Includes discussion with SMC adjunct professor Sheila Laffey and members of Plastic Free SMC Club.

• April 25, 11:30 a.m. – Documentary Film Screening and Q&A: “SMC Club Grow: Evolution of Organic.” Documentary on organic agriculture directed by Mark Kitchell, Evolution of Organic (77 min.) tells the stories of the motley crew of back-to-the-landers, spiritual seekers, and farmers’ sons and daughters who rejected chemical farming and set out to explore organic alternatives, leading to a cultural transformation in the way we grow and consume food. Includes discussion with SMC adjunct professor Sheila Laffey and members of SMC Club Grow.

All programs are subject to change without notice, and new events may be added to the series. Up-to-date details are posted on the Events at SMC website and available by calling 310-434-4100.