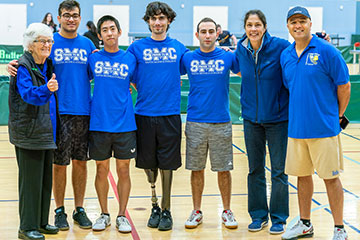 In order to qualify for the nationals, SMC won the divisional tournament held Feb. 9 at the SMC Pavilion, defeating UCLA 3-1; California State University, Northridge 3-2; and Cal Poly, San Luis Obispo 4-0. Subsequently, SMC advanced to the regionals held March 9-10 at the Orange County Table Tennis Academy. There, the team defeated University of Washington (3-1), USC (3-1) and Stanford University (4-0) to advance to the National Championship.

“We have a very talented team. They worked really hard to make it to the national championship, and I am so proud of them!” said Kamran Khairzad, the SMC team’s coach (he is also an SMC alum). The SMC Table Tennis Team is composed of Ayush Kapoor, who is majoring in statistics at SMC and has played for the junior national team in India; Tiziano Aiello, an SMC Business major who played for the junior national team in Italy; Ari Arratio, from Venice, California, who plays for Team USA Paralympics, an SMC Computer Science major; and David Chow, a Los Angeles native who also plays for several local clubs.

The SMC Table Tennis Program — an inductee into the California Table Tennis Hall of Fame — has a storied history in the world of table tennis. In 1971, the late Glenn Cowan (1952-2004) — a table tennis champion since childhood, and an SMC student from 1969 to 1972 — was the youngest member of the first U.S. table tennis team to go to China and compete in what became known as “Ping-pong diplomacy”, a development that helped open the doors for diplomatic relations between the two nations. Cowan was posthumously inducted into the California Table Tennis Hall of Fame in 2014.

USATT – organized under the United States Olympic Committee as the national governing body for the sport of table tennis in the U.S. and a member of the International Table Tennis Federation (ITTF) – promotes opportunities for athletes and coaches to participate in more than 250 clubs and over 350 tournaments across the nation annually, and selects and trains teams for international competition, including the Pan American and Olympic Games.

Santa Monica College – a California Community College established in 1929, accredited by the Western Association of Schools and Colleges (WASC), and California’s leader in transfers to University of California campuses – provides a comprehensive array of educational, athletic, and recreational opportunities to the public.

For more information about SMC’s table tennis programs and annual tournaments, send an email to smctabletennis@gmail.com or visit the SMC Table Tennis website.