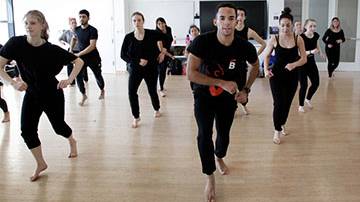 It was a unique opportunity for SMC students to learn directly from dancers The Washington Post has called “. . . the most technically accomplished and musical dancers you’ll find in the contemporary sphere.” The master classes are part of an ongoing collaboration with The Broad Stage at the SMC Performing Arts Center Education & Community Programs.

SMC students can avail themselves of deeply discounted tickets and special events such as the master classes, while “spotlight talks” feature SMC fine arts professors who are experts in their fields and lead pre- and post-show conversations, panel discussions or Q&A's before select performances at The Broad Stage. SMC dance professor Vanessa Van Wormer gave the spotlight talk before Ballet Hispánico’s Saturday, March 23 performance at The Broad Stage.

Other master classes planned for the remainder of the Spring 2019 semester include an improvisation and youth theater workshop with Story Pirates on April 18; a master class on May 14 with artist-in-residence and violist Richard Yongjae O’Neill, Emmy® Award winner, two-time GRAMMY® nominee, and Avery Fisher Career Grant recipient; and a screening with the SMC Music Department on May 23 of O’Neill’s Hello?! Orchestra (co-created with the Korean broadcaster MBC TV and SEN Media in 2012, the film tracks an international group of children, many who face difficulties because of their multicultural heritage in Korea. Started in 2012, Hello?! Orchestra began with 24 children from Ansan, South Korea and has grown to include more than 50 children who perform regularly).

From its grassroots origins as a dance school and community-based performing arts troupe, Ballet Hispánico has grown into a world-class institution. Recognized for her achievements by the National Medal of Arts, the nation’s highest cultural honor, Tina Ramirez founded Ballet Hispánico in 1970. Ballet Hispánico’s New York City headquarters house a School of Dance and state-of-the-art dance studios for its programs and the arts community. In August 2009, Ballet Hispánico welcomed Eduardo Vilaro as its Artistic Director. See the Ballet Hispánico website for more information.