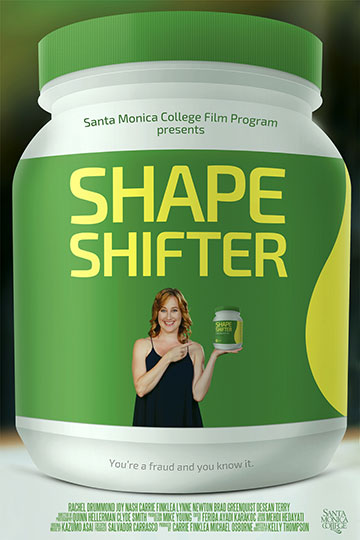 Written and directed by SMC alum Kelly Thompson, “Shape Shifter” is a comedy that deals with the topic of body image. “It's about a woman who sells weight loss products on an infomercial and she knows they don't work,” said Thompson. “She finally has to come to a decision on whether she can continue doing that or not. It's a moral decision.”

“It's a really personal script for me,” added Thompson. “When we first read the script in the class, tons of students stood up and discussed how they've had to deal with body issues, either with physical insecurities or other things.”

“I am very proud of what our students achieved with 'Shape Shifter' because it is a highly entertaining and intelligent comedy that delivers a powerful social commentary about body image, consumerism, and the need for us to seek answers within rather than without ourselves,” said Carrasco.

SMC alumni Carrie Finklea and Michael Osborne also assisted as the film’s producing team. “‘Shape Shifter’ is a refined dark comedy about the infiltration of consumerism and its psychological impact on the individual,” said Finklea. “If the product Brenda [the protagonist] represents is fraudulent, what does this mean about herself?”

“This is one of the most talented casts of actors you could hope for,” added Osborne. Expanding on the film’s wider themes, Finklea said, “It is also a social commentary about other institutions, such as religion and corporate television. It brings to light the idea that we don’t question enough the institutions we blindly subscribe to.”

On the opportunities afforded by the SMC Film Program, Thompson said, “I think two percent of Directors Guild of America (DGA) directors are women. It's an exciting opportunity. I love that about the SMC Film Program, that Professor Carrasco tries to have equality between genders and economic backgrounds and [ethnicities]. Everyone who gets a chance deserves it.”

SMC offers an Associate in Science degree and Certificate of Achievement in film production. To learn more, email Carrasco_Salvador@smc.edu or see the Film Production website. The film program—as well as the films that come out of it—is on YouTube as the “Santa Monica College Film Program” channel. SMC’s film production program is housed at the college’s new Center for Media and Design in the heart of Los Angeles’s entertainment district.