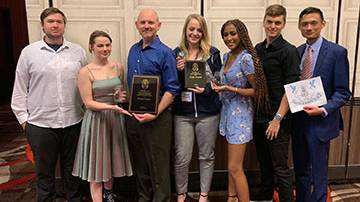 SANTA MONICA, CA—Santa Monica College (SMC) is pleased to announce that the SMC speech and debate team includes a national champion, having won the final round in International Public Debate at the Phi Rho Pi national speech and debate tournament in Reno, NV during spring break.

Hundreds of students from 56 community colleges around the nation competed at Phi Rho Pi in a variety of events, including debate, oral interpretation, interpreter’s theatre, platform speaking, and limited preparation speaking.

Debate Team Captain Shaindi Schwebel had this to say: “Debate has enabled me to find my voice in a way I never could have imagined, and given me the chance to lead a team of brave, passionate, and intelligent people. Going to Phi Rho Pi is a once (or twice) in a lifetime experience that can’t be replicated. Taking home the gold in IPDA is the culmination not only of my hard work but of my coach’s and teammates’ hard work and dedication as well.”

The SMC Debate Team’s presence at this tournament was sponsored by the SMC Foundation Chair of Excellence Grant, the Associated Students of Santa Monica College, and the SMC Board of Trustees.