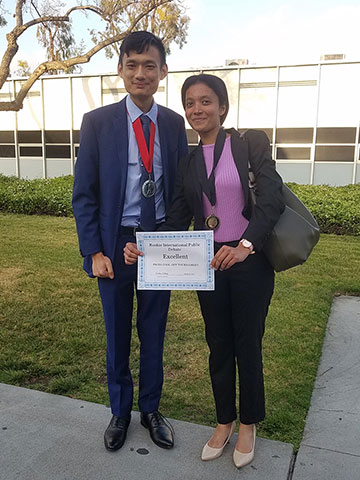 Chern Xun Gan (left) and Arundhati Ghosh with their medallions and certificate after the PSCFA Cool-Off awards ceremony.

Over 100 students from 22 California and Arizona community colleges competed at the tournament in a variety of events, including debate, oral interpretation, platform speaking, and limited preparation speaking.

“It was kind of hard to compete at the last round of the debate tournament but it was a learning experience,” said Arundhati Ghosh, “I learned some new ways of effective and efficient debating. It was a new experience for me!"

Ghosh debated about whether corporations ought to be held to the same moral standards as the actions of individuals, whether ethical concerns outweigh economic concerns, whether Disney does more harm than good, and whether philosophy should be valued over science.

For more information on the SMC Debate Team, contact Nate Brown at brown_nate@smc.edu or 310-434-8781