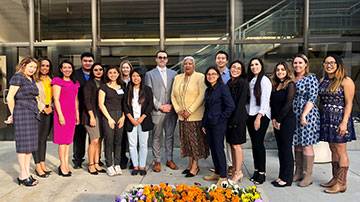 This third cohort marks the largest group of graduates yet the program’s inaugural cohort in 2017 had 10 students; in 2018, 16 students graduated from the SMC Law Pathway Program.

"At Santa Monica College, you get to define what your future will look like,” said Kolko. “You’re given a platform from which you can take off as far as you aspire to. This is a school that truly cares about ensuring that the student body has this opportunity.”

A former SMC student trustee, Kolko discovered his passion for law at Santa Monica College while spearheading “Consent Month,” a student initiative to promote awareness for domestic violence and sexual assault through a month of interactive educational events on campus. He was also an SMC Dale Ride intern who interned for Senator Dianne Feinstein in Washington, D.C. and later served as a judicial intern for Los Angeles Superior Court Judge Maureen Duffy-Lewis.

Xochitl Buenabad—the program’s youngest graduate—said that she has wanted to be a lawyer since she was 14. “At 17, I’m reading the constitution and I’m passionate about it!” she quipped, and went on to say that her experience in the program and in college has proven that “if you want something badly enough . . . it will happen for you.”

“The backbone of the Law Pathway Program is the incredible staff at SMC, our advisory council, and California Law, Inc. whose mission is to establish a pipeline of diverse students into law so that the legal profession reflects the diversity of California,” said Edna Chavarry, Director of Academic Affairs Initiatives at SMC. “We are actively working to grow a program that is a robust pathway for traditionally underserved students towards a career in law.”

SMC Political Science professor Christina Gabler, who teaches constitutional law and the capstone course “Experiential Learning in the Law,” said, “It has been such a privilege to watch the students support each other through their successes and setbacks as they navigate this new, professional world. They will be leaving SMC with not only the academic preparation that this college provides but also the unique professional experience that is the Santa Monica College Law Pathway.”

SMC formed the Law Pathway Program after joining the California Law Community College Pathway to Law School Initiative in 2015, a collaborative effort between California Law Inc., The State Bar of California’s Council on Access & Fairness and 29 community colleges and 8 law schools. The collaborative was designed to help diversify the legal profession and smooth the path to law school for underrepresented students. Thuy Thi Nguyen—current president of Foothill College and former Interim President and CEO of the Community College League of California—was the architect of the Initiative and the founding board chair of California L.A.W. Pathway, the nonprofit that coordinated this unprecedented “2+2+3” program.

The May 14 celebration was made possible by generous donations from the Law Pathway Advisory Council.