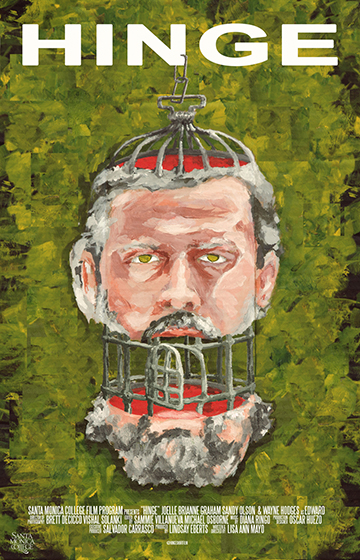 The winners of the fourth edition of the festival—which took place in Prague, the Czech Republic, from August 5-8—were announced on the Prague Independent Film Festival website. There were 14 prize winners and the Grand Prix was awarded to the Finnish film "M" by Anna Eriksson. The film festival accepted submissions from professional filmmakers from all over the world, and 51 were selected by an international jury. While most of the films were Czech Republic premieres, films from various countries such as the U.S., the United Kingdom, China, Ireland, France, Finland, Russia, Bulgaria, France, Luxembourg, and Germany were also screened.

A poignant LGBTQ drama, HINGE tells the story of a mentally unstable man who develops a fixation on his new neighbors—a lesbian couple with an idyllic life—when he stops taking his anti-psychotic medication.

Writer-director Lisa Mayo said that the topic of mental health is something of importance to her. “I gained a great deal of compassion and respect for patients suffering from mental health issues during my time as a registered nursing student,” said Mayo. “I witnessed firsthand the stigma that was attached to these patients by the very people that were supposed to be caring for them. I also noticed the lack of resources for patients as well as a lack of support for their caretakers. I began to ask myself, ‘how can we help?’ but I didn’t know the answer.”

HINGE was inspired by a true incident, said Mayo. “Then something awful happened to someone I know . . . my friend was attacked by a neighbor who suffered from a severe mental health condition.” This incident, Mayo stated, gave her an answer to a very different sort of question: ‘What can happen if we don’t help?’”

Producer Lindsay Eberts called HINGE an “unflinchingly real story.” “This prize is such an honor, and proves that our film addresses a story that is not only timeless but universal too,” she said.

HINGE is an “incredibly powerful film that embodies the very essence of what we’re doing at Santa Monica College’s Film Production program,” said Salvador Carrasco, Head of SMC Film Production. “Not only was this film rigorously conceived and sensitively executed, but it also has something meaningful to say about mental health issues and the prejudice that members of the LGBTQ community face in our society today.”

While the award is “terrific”, Carrasco said that the real standout was how “25 SMC students from all walks of life brought their talent, passion, and impeccable work ethic to help materialize Lisa’s dream of telling a story that is very close to her heart.”

SMC offers an Associate in Science degree and Certificate of Achievement in Film Production. To learn more, visit the Film Program website or email Carrasco_Salvador@smc.edu. The film program—as well as the films that come out of it—is on YouTube as the “Santa Monica College Film Program” channel.