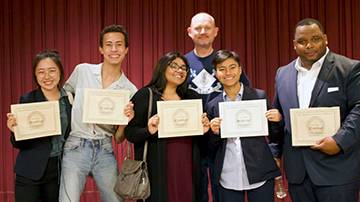 Twelve SMC students competed in this first tournament of the 2019-2020 season, including five returning team members and seven SMC students who are new to the team. Five of the new team members who competed won high-level awards in International Public Debate Association (IPDA) debate, in which each competitor engages in four rounds of one-on-one debate—with only 30 minutes to prepare before each round. Eighty nine students from 15 two-year institutions from Southern California participated in the debate competition.

“After my first championship, I’m feeling incredibly motivated and excited toward my future in debate,” said Dexter Cypress, who won an “Excellent” award. “I’m beyond proud of my fellow teammates, and looking forward to the next competition!”

Fellow “Excellent” award winner Brina Ross echoed the sentiment—and had another reason to be proud: “I’m even more proud of myself for accomplishing my fear of public speaking and cannot wait for more wins . . . and to become a better public speaker!”

Brandon Anderson said that he “. . . had a feeling that I was participating with the future minds and leadership of California.”