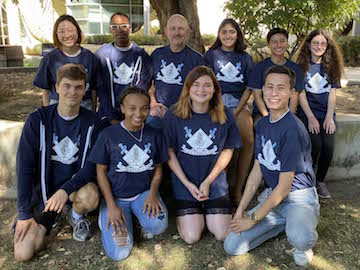 On day one of the tournament, 13 students competed in the team event of National Parliamentary Debate Association (NPDA). Teams from 16 community colleges and six universities competed, including UC Berkeley, UC San Diego, and Concordia University.

SMC’s Xochitl Buenabad, Dexter Cypress, and Ariyana Tavakoli advanced to the octo-finals. Debate topics included the importance of the rights to privacy; reforming sentencing of non-violent criminals in California; whether the method of conducting presidential debates needs reform; and whether the U.S. should pass the Horse Racing Integrity Act.

Some of the IPDA debate topics included universal basic income; the consideration of paying college athletes; forgiveness of student loan debt; and the advantages and disadvantages of rent control.

Dom Smith, who took first place in the Open division, debated against Nicolas Graves of UC San Diego, who is an SMC Debate Team alum. “If someone had to beat me, I’m glad it was [someone from] SMC,” Graves said. Smith won every round in which he debated that day.

“Competing in IPDA after having competed in NPDA the day before really helped me elevate my organizational and argumentation techniques,” said Rachel Sun. “I also found that having a little knowledge about foreign relations and politics is very helpful because all the resolution topics and previous research is cross applicable to other foreign relation topics.”

Team captain Brandon Chase said, “No matter how many tournaments I go to, I always feel like I’ve learned so much. Each one is its own unique adventure, and there’s never a dull moment. The crazy thing is you can win against the best of the best, and lose to the worst, so you never truly know how you did until you get your ballots. I'm just incredibly proud of our team. We had the biggest team ever sent to a tournament, and half of them made it into the elimination rounds! Our hard work and dedication is paying off!”

Xochitl Buenabad said that watching her teammates succeed alongside her was “a rewarding feeling.”