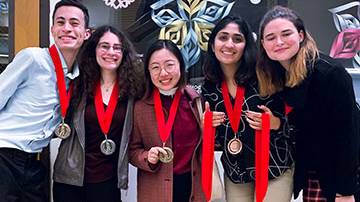 On Friday, Dec. 6, three pairs of students competed in the team event of National Parliamentary Debate Association (NPDA). SMC students Ariyana Tavakoli and Dexter Cypress advanced to the final elimination round and won against Pasadena City College on the topic, “The Democratic Party has shifted too far to the left.”

“Fall Champs was the tournament that made me realize how proud I am to be a part of such an encouraging and amazing team,” Tavakoli said. “It gave not only me, but the entire team the chance to show who we really are and I can’t wait to see what the future holds!”

Sun said that she was “very grateful for such an enriching and fulfilling debate experience this semester.” “I am forever thankful for all the encouragement and guidance I’ve received from my team members and our coach, Nate Brown,” she added.

Andrew Gamboa—whose Bronze award was his first trophy, at the fifth tournament of the semester—said, “Personally, my time in Communication Studies 22 (Introduction to Competitive Speech & Debate) felt like being with family. A class of ambitious individuals who care about one goal: winning and being better debaters. Because of this similarity, we became friends with each other; these friendships became a major supporting role for the vast majority of us winning awards. A family supports and cares for each other—there is no other class at Santa Monica College that embodies this value more than the Speech and Debate Team!”