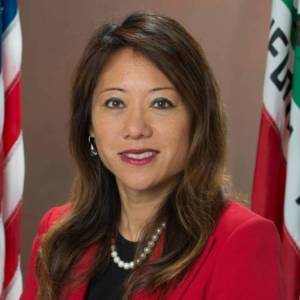 California State Treasurer Fiona Ma will be the commencement speaker at the Santa Monica College 91st Commencement Ceremony, which will be online this year at smc.edu/graduation at 4 p.m. on Friday, June 25. A special Diploma Drive-Thru Celebration for the graduates will be held from 9 a.m. to 5 p.m. on Saturday, June 19, at the SMC Bundy Campus (3171 S. Bundy Drive, Los Angeles).

SANTA MONICA, CA — California State Treasurer Fiona Ma will be the speaker at the Santa Monica College 2021 Commencement Ceremony on June 25. The ceremony will once again be online this year as a virtual event due to public health safety protocols regarding large-scale, in-person events during the COVID-19 pandemic.

Commencement festivities will start promptly at 4 p.m. on Friday, June 25. Families and friends from all over the world can go to smc.edu/graduation to enjoy the ceremony, congratulatory speeches, and “Move the Tassel Moment” for the graduates. Special personal quotes, photos, and short videos of graduates celebrating their academic achievement will also be available to view.

A special Diploma Drive-Thru Celebration for the graduates will be held from 9 a.m. to 5 p.m. on Saturday, June 19, at the SMC Bundy Campus, located at 3171 S. Bundy Drive, Los Angeles. The celebration will be an in-person event, and all COVID-19 safety protocols will be followed.

About 1,000 of the 5,135 students who have earned degrees and certificates are expected to take part in this year’s graduation.

“We are delighted to be able to add an in-person component in the form of a diploma-drive thru event this year, Santa Monica College’s second commencement celebrations in a virtual setting,” said SMC Superintendent/President Dr. Kathryn E. Jeffery. “And we are equally delighted to have Treasurer Ma—an inspirational leader and public servant who has shattered the glass ceiling—to speak to the second cohort of SMC graduates to have persevered and succeeded in achieving their educational goals through one of the most difficult times in human history. I am immensely proud of them!”

Fiona Ma is California’s 34th State Treasurer. She was elected on November 6, 2018, with more votes (7,825,587) than any other candidate for treasurer in the state’s history. She is the first woman of color and the first woman Certified Public Accountant (CPA) elected to the position.

Treasurer Ma is the state’s primary banker for California, the world’s fifth largest economy. Her office processes more than $2 trillion in payments a year, and oversees an investment portfolio of more than $124 billion, about $34.8 billion of which are local government funds. She serves as agent of sale for State bonds, and is trustee on debt of $93 billion.

In 2020, her office refinanced $6.2 billion of debt, creating a savings of $1.8 billion for California taxpayers.

Before being elected Treasurer, she was an elected member of the California Board of Equalization from 2015 until January 2019 and worked to protect the rights of taxpayers while ensuring California collected its fair share of tax revenues.

Treasurer Ma served in the California State Assembly from 2006-2012, serving as Speaker pro Tempore from 2010 to 2012. During the budget crisis, she passed legislation to expand access to health care, and to protect education and the environment.

From 2002 to 2006, she served on the San Francisco Board of Supervisors and worked on many issues, including ending human trafficking in massage parlors.

Treasurer Ma became involved in public service in 1994 when she was elected president of the Asian Business Association. From 1989 to 1993, she worked for Ernst & Whinney, before starting her own accounting practice in San Francisco.

Treasurer Ma has been a licensed CPA in California since 1992 and holds a Bachelor’s Degree in Accounting from the Rochester Institute of Technology (NY), a Master’s Degree in Taxation from Golden Gate University (SF), and an MBA from Pepperdine University.

She is a Member of the Vatican’s Council for Inclusive Capitalism, Member of the California Society of Certified Public Accountants, serves on the Board of California Women Lead, is an Honorary Chair and Spokesperson for the San Francisco Hepatitis B Free Campaign, and is a member of the Screen Actors Guild. She is married to Jason Hodge, a full-time firefighter and Oxnard Harbor Commissioner.