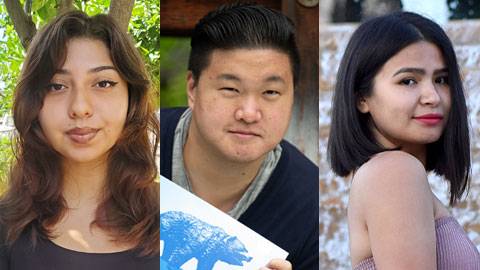 On June 25, Santa Monica College (SMC) will officially award 8,131 degrees and certificates to 5,135 students, a class that has persisted through a global pandemic and other great odds. Among them will be Emily Zamora, the first in her family to attend college; Joshua Lin, whose formal education first ended in sixth grade; and Ainura Abdullayeva, who had to finish her education from 7,000 miles away—from her home in Almaty, Kazakhstan.

On June 25, Emily Zamora, Joshua Lin, and Ainura Abdullayeva will be Among 5,100+ Students to Graduate from Santa Monica College

SANTA MONICA, CA —On June 25, Santa Monica College (SMC) will officially award 8,131 degrees and certificates to 5,135 students, a class that has persisted through a global pandemic and other great odds. Among them will be Emily Zamora, the first in her family to attend college; Joshua Lin, whose formal education first ended in sixth grade; and Ainura Abdullayeva, who had to finish her education from 7,000 miles away—from her home in Almaty, Kazakhstan. Zamora and Lin are transferring to UCLA, Abdullayeva to CSU Long Beach.

SMC is holding a first-ever Diploma Drive-Thru Celebration from 9 a.m. to 5 p.m. on Saturday, June 19, at the SMC Bundy Campus, located at 3171 S. Bundy Drive, Los Angeles with all COVID-19 safety protocols to be followed. Commencement festivities will be held online at 4 p.m. on Friday, June 25. Families and friends from all over the world can go to smc.edu/graduation to tune into the virtual ceremony. Fiona Ma, California’s 34th State Treasurer, will be commencement speaker. The nine youngest graduates are 17 years old and graduate with an Associate degree; the oldest graduate is 94 and graduates with a Certificate of Achievement in Animation Foundation.

Among these graduates are Lin, Zamora, and Abdullayeva. To read more inspirational stories like theirs, go to smc.edu/spotlight/graduation-stories.

Emily Zamora: Seeing Beyond the Immediate

Becoming an immigration lawyer is what motivated Emily Zamora, born into an immigrant household with relatives who migrated to the United States, to become the first in her family to attend college. To succeed, she had to overcome obstacles ranging from her parents’ demanding work schedules — which left her caring for her younger brother — to not having a support system of family members who had navigated through higher education and understood how to prepare for the rigors of college classes. Still, she headed to SMC, where she joined the academically challenging Scholars Program.

“A friend, an international student at SMC, told me about the program and said it was research-based,” Emily said. “I was scared about the gap I might be facing on research, but I wanted something to challenge me, build me up, so I was better prepared to do well at a university.” Emily also launched an SMC chapter of Amnesty International’s Amnesty Human Rights Club, where she holds the officer position of Treasurer.

Currently working at a civil and human rights organization, Emily is responsible for researching social and political issues occurring in South Los Angeles and throughout the Greater Los Angeles Metropolitan Area. She also holds monthly workshops for LAUSD students, helping them learn about issues that affect them and craft public comments to present at LAUSD board meetings to ensure funding and other resources are going to schools with low-income students.Emily graduates from SMC with two degrees: an Associate Degree for Transfer in Political Science, and an Associate degree in Liberal Arts – Humanities. She will transfer to UCLA as a Political Science major, then continue on to earn a law degree.

To call Joshua Lin a school dropout would be sugar-coating things. The 36-year-old LA native’s formal education ended when his Taiwanese immigrant parents abruptly pulled him out of 6th grade. His family belonged to a New Age religion whose prophet believed school “brainwashes children away from God.”

Josh’s teen years were divided between intense Bible study and underpaid labor as a bicycle courier for his mother’s employer. What little money he earned, the family confiscated. His only escape came through reading, and the public library became his sanctuary.

At 22, Josh broke with the church and his family, leaving home penniless and uneducated. He found work as a personal trainer and part-time property manager, but secretly dreamed of returning to school. In 2015, he passed the GED and enrolled at Santa Monica College. Financial setbacks and bouts of depression forced Josh to take detours, but after a bumpy start, he began earning top grades in his courses. He joined the Scholars Program, and found an “auntie” in counselor Audra Wells. “She’s pretty much held my hand through the entire process,” he said.

Josh credits a course in symbolic logic taught by Paul Klumpe as the turning point in his intellectual awakening. “At the tender age of 35, I started formulating my own ideas versus doing what I’m told or going through the motions.”

Josh graduates from SMC with an Associate degree in General Science and a near-perfect 3.95 GPA. Although accepted to Columbia University and UC Berkeley, he has decided to transfer to UCLA, with plans to study law and become a corporate litigator.

Ainura Abdullayeva, an Art major from Kazakhstan, had to return to her home country when COVID-19 hit. Scared and uncertain of the future, she made a vow on the plane ride: No matter what it took, she was not going to lose the home she had made for herself at SMC.

Starting her first semester at SMC in spring 2019 was a dream come true. Ainura knew hard work would allow her to shine academically, but she also wanted to experience the SMC community. She immediately joined the Cheer Club, and in fall 2019, she became a member of the honor society Phi Theta Kappa.

Ainura also wanted to gain American work experience. As an international student who could only work on campus, she took a job at Campus Kitchen in the college’s cafeteria, where she loved meeting the students, faculty, and staff who stopped by. With her “promise made in the sky” front and center, Ainura has carried on — from Kazakhstan — as a full-time student with a 4.0 GPA. She has also been working online to help international students as a Peer Mentor at SMC’s International Education Center (IEC), holding weekly student Zoom meetings, reaching out to prospective students via webinars, conducting virtual campus tours with SMC’s Student Ambassadors, and helping IEC staff guide new students through the enrollment process.

Ainura graduates from SMC with an Associate degree in Art. She plans to work and gain professional experience for a year, then transfer to CSU Long Beach and study Graphic Design.

To read more about SMC’s graduates, check out the “2021 commencement program” at smc.edu/graduation.