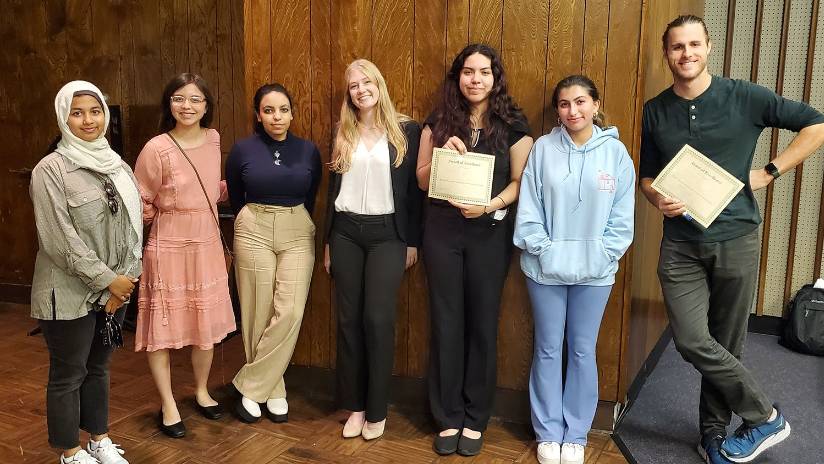 SMC students Nadia Lopez and Orion Young were awarded “Excellence” for winning three out of their four debate rounds.

“While I really enjoyed competing, I also really liked getting to know the team better. Practice debates can feel a bit impersonal and intimidating when you haven't competed,” said Nadia Lopez. “The tournament was an opportunity to all be on the same team and complain about topics, get lost finding our rooms, or laugh over a ridiculous analogy we made for the sake of arguing your point.”

Lopez added that the in-person tournament gave her a new perspective on how much fun debating can be “if you let yourself see it that way.”

Orion Young appreciated the opportunity, too, stating that, “trying to guess how other debaters are going to interpret the topics is the most fun. It’s also interesting to see which arguments and strategies end up resonating with the judges. It’s often not the ones that I would expect.”

Students debated on a variety of topics. Angelina Sandoval noted that “arguing that the U.S. Federal Government should adopt California’s EV policy was interesting. Other than research and organizing, when you don’t know what the opponent will say, creativity was essential.” Other topics included “The U.S. should grant statehood to Puerto Rico,” “Access to higher education is a human right,” and “Zero cash bail does more harm than good.”

The SMC Debate Team functions both as a student club and as a Communication and Media Studies department class. Meeting and practicing just a couple hours per week, students discuss current events, practice debating, and learn about their own strengths and weaknesses.

“Our students give up a lot of time and energy to compete on the debate team,” said Debate Coach and Communications & Media Studies Professor Nate Brown. “Weekend tournament are long and physically and psychologically strenuous. I am always inspired by the students who feel drawn to it and are willing to dedicate so much of themselves to it.”

The SMC Debate Team’s presence at this competition was sponsored by the Associated Students of Santa Monica College. For more information on the SMC Debate Team, contact Nate Brown at brown_nate@smc.edu.