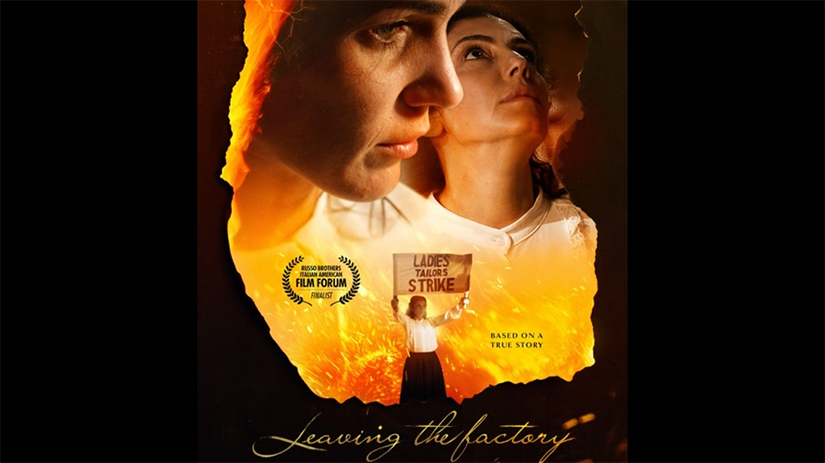 Santa Monica College student film "Leaving the Factory" is one of three finalists to be screened during the National Italian American Foundation's (NIAF) 47th Anniversary Gala Weekend at the NIAF Forum on October 29th in Washington, D.C. The winning film will be announced during the gala awards dinner to be held that evening. The three finalists received an $8,000 grant each and are in the running for an award in the competition organized by the Russo Brothers (for the Russo Brothers Italian American Film Forum).

Film Focusing on the Story of Mistreatment of Italian Immigrant Women Factory Workers and their Struggle to be Screened at NIAF Forum Gala Oct. 29

SANTA MONICA, CA—Santa Monica College student film "Leaving the Factory" has been selected as one of three finalists to be screened during the National Italian American Foundation's (NIAF) 47th Anniversary Gala Weekend at the NIAF Forum on October 29th in Washington, D.C. The winning film will be announced during the gala awards dinner held that evening. The three finalists received an $8,000 grant each and are in the running for an award in the competition organized by the Russo Brothers (for the Russo Brothers Italian American Film Forum), an initiative to fund films depicting and exploring the Italian American experience “for the benefit of future generations.”

Written and directed by SMC Film Production student Alessia Crucitelli and produced by Andrew James Levay & Catharine Dada, “Leaving the Factory” focuses on the story of the mistreatment of Italian immigrant women factory workers, and their struggle to overcome oppression.

“´Leaving the Factory’ is a story about Italian immigrants, written by an Italian immigrant, and made by a multicultural crew that included Italians,” said Alessia Crucitelli. “I’m incredibly grateful to everyone involved because they stuck with the project during pandemic-related setback after setback. I am very proud of their ingenuity, creativity, and dedication, along with all the talented collaborators who came on board in the few months leading up to production and beyond. I am appreciative of the opportunity that Santa Monica College afforded me and of the guidance of our professors throughout this process.”

Dada and Levay stated that “producing is all about relationships. You have to interact with so many people: your crew, the owners of locations, permit advisors, etc. The more you treat people with respect and kindness, the more you can get done. It was exciting to be able to nurture the process from the page to the screen, and we were supported every step of the way by SMC Professors Salvador Carrasco, Simone Bartesaghi & Vishal Solanki, and SMC production coordinator Drew Davis."

Alongside “Leaving the Factory” the two other finalists are “Rossi & Company” by Agata De Santis, and “Defending the Peninsula” by Charles Vincent Sabba. The viewing will be followed by a Q&A with the filmmakers after the showing, moderated by Taylor Taglianetti, founder and president of the National Organization of Italian Americans in Film and Television (NOIAFT).

“I am incredibly proud of my SMC students for pulling off a film like ‘Leaving the Factory,’ which transcends the often-reductive connotation of ‘student film’,” said Salvador Carrasco, SMC film production faculty lead. “It is a truly extraordinary film that strikes a chord with audiences through its powerful balance of artistry and humanity: the 1911 period recreation, the unforgettable music, the performances by both the leads (Roberta Sparta, Anne Bedian, and Roberta De Santis) and the background talent–all a testament of cinema at its best. I believe NIAF’s and the Russo Brothers’ acknowledgment of ‘Leaving the Factory’ speaks volumes of how a community college like SMC can combine a high level of craft with profoundly affecting storytelling based on our students’ natural proclivity for purpose-driven filmmaking.”

The Russo Brothers, who organized the competition, are best known for directing four films in the Marvel Cinematic Universe (MCU). One of them, Avengers: Endgame (2019), grossed over $2.8 billion worldwide, becoming one of the highest-grossing films of all time. Thanks to their successes in the MCU, the Russo brothers are considered the second most commercially successful directors of all time, behind Steven Spielberg.

Santa Monica College was named one of MovieMaker’s 40 Best Film Schools in the U.S. and Canada of 2022, and one of the top 12 in the U.S. West and Northwest alongside Stanford University, UCLA, USC, ArtCenter College of Design, and California Institute of the Arts, among others. And Hollywood Reporter flagged SMC as one of eight excellent low-cost alternatives to top-25 film schools based at private universities.

SMC offers an Associate in Science degree and Certificate of Achievement in Film Production. To learn more, visit smc.edu/filmproduction or email Carrasco_Salvador@smc.edu. The film program—as well as the films that come out of it— is on YouTube as the “Santa Monica College Film Program” channel.